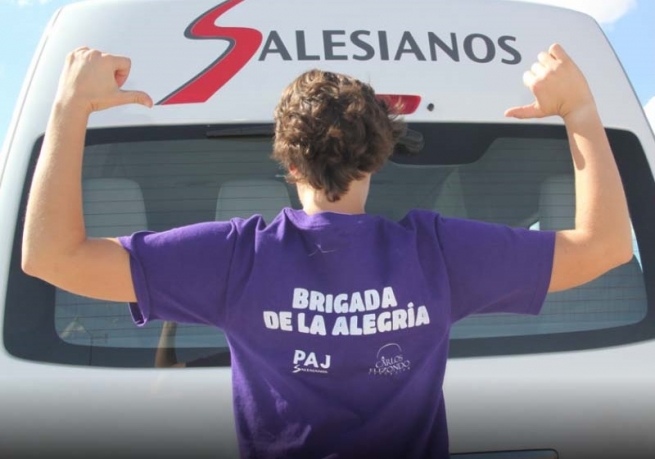 (ANS - Ciudad Juárez) - A decade ago, Ciudad Juárez experienced such a wave of violence that at night there was a latent but effective curfew. No one walked down the street and the parks had ceased to be meeting places for the neighborhood's youth and had, instead, become market squares and places of criminal organizations and gangs. The extortion of merchants made everyone fear for their lives and everywhere and at any time someone might settle their accounts with a weapon and maybe sow even more fear with useless murders and of innocent people.

The Salesians undertook to restore the joy that was lacking in the poorest and most dangerous neighborhoods and also to restore the childhood that the new generations of Ciudad Juárez were losing. They did it with what Don Bosco did best: outdoor games. This is how in 2012, within the Salesian oratories of the city, the "Brigada de la Alegría" (Brigade of Joy) was born, which in the early years also received State aid to move to some twenty areas of the city, as if it were a traveling circus.

A representative van, t-shirts, flags and drums are the calling card of a group of Salesians and volunteers, who arrive in a park at sunset and bring joy with music and songs that attract the attention of children, to attract them and encourage them to participate in fun choreographies and games. Slowly, gradually, about a hundred children come to join this Brigade of Joy that, after two hours of music and games, concludes with a 'thought' applicable to everyday life and a snack for the participants, who are invited to attend the nearest oratory or participate in the next visit to their area.

In recent years, the Brigada de la Alegría has also visited the minors of one of the two juvenile prisons of Ciudad Juárez twice a week, a prison for boys between the ages of 14 and 18 who have committed crimes of blood, violence or kidnapping. As in the time of Don Bosco, the volunteers and Salesians animate games and dynamics so that when the children leave the juvenile prison they can start a new life away from the gangs and even resume their studies.

Brigade members have even spent Christmas with them, sleeping in their modules, and they intend to repeat this experience again this year.