Vatican – The Cause of Servant of God Ignatius Stuchlý advances 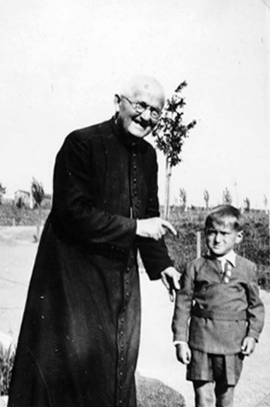 (ANS - Vatican City) - On 5 November 2019, during the special Congress of Theological Consultors at the Congregation for the Causes of Saints, a positive opinion was given unanimously as regards the reputation of sanctity and the exercise of heroic virtues of the Servant of God Ignazio Stuchlý, Professed Priest of the Society of St. Francis de Sales (1869-1953).

The Servant of God Fr Ignatius Stuchlý lived in an age marked by important historical, political and social upheavals, but he knew how to adapt to ever new contexts and, in obedience to the Church and to the service of young people, he often assumed government duties. Like when:

- still a young Salesian, he was sent to Gorizia, where he collaborated with the archbishop and other Salesians in accompanying an authentic vocational flowering at the “Convitto San Luigi”;

- he moved to Ljubljana, Slovenia, and contributed to the launch of the local Salesian house and to the completion of the shrine of Mary Help of Christians in Rakovnik;

- called back to Italy, in the mid-1920s, he selected candidates for Salesian religious life for the Czech Republic, implementing a firm and prudent discernment;

- he transplanted this work to Bohemia and Moravia, in response to the concrete need of the local Church.

As founder of the nascent Salesian presence in those lands, then as Superior of the Czechoslovak Province (1935) and later of the Czech Province alone, between 1925 and 1948, Fr Stuchlý accompanied at least 200 new Salesian vocations just in Bohemia and Moravia; he was founder of houses; ferried Salesian works through the drama of the Second World War ...

To the Czech confreres, the Servant of God succeeded in transmitting not only the structures, but the lively spirit of the Salesian tradition he had breathed in Piedmont, having also enjoyed a particular familiarity with Blessed Michael Rua and other Salesian saints.

Under the rule of Nazism and then of communism, and until his last years of life, spent in the confinement of a house for the elderly in which he was spied and controlled, Fr Stuchlý continued to attest to this integral fidelity to the Church and to the Congregation, testifying how no condition of suffering and injustice can distance us from the fullness of self-giving to Christ.