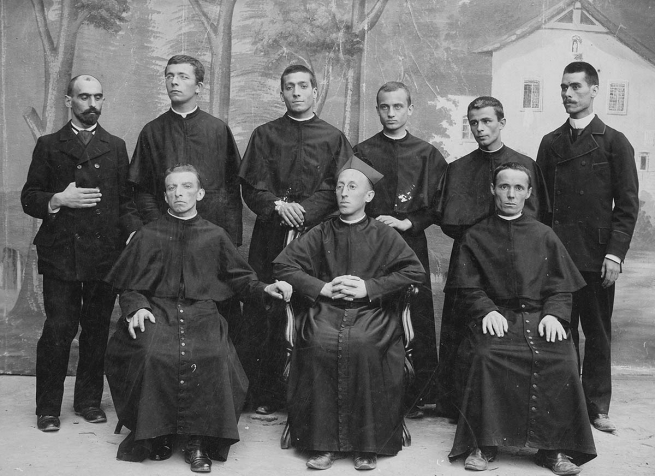 (ANS - Lisbon) – 125 years ago, on 8 November, 1894, the first Salesians arrived in Portugal to take over the management of the “St. Caetano” College in Braga. The institute, founded in 1791 by Msgr. Caetano Brandão, welcomed and educated children and young people, mostly orphans and abandoned children. It was free of charge, and also admitted a small number of internists. With the arrival of a small group of Salesians, the Salesian presence in the country was thus inaugurated. The missionaries were three and young: Fr Pietro Cogliolo, 28 years old; Fr Angelo Bergamini, of 30; and cleric Giuseppe Galli, just 17 years old.

The reception of the first Salesians in Portugal was narrated by Fr Michele Rua, First Successor of Don Bosco in the government of the Congregation, through a letter from the Director, Fr Cogliolo, dated 12 November 1894: "All the students of the excellent Dr. Padre Francisco da Cruz, who until then had directed the College, were waiting for us at the station. Other representatives of the clergy and lay people were also present, as well as many people curious to see the Salesians whom they had long been waiting for and of whom the country's newspapers had often spoken."

And then he adds: "The College building was illuminated and the small instrumental band of students was waiting for us at the entrance. Everyone's face was full of joy." Then, in the chapel of the College, Fr Cogliolo thanked everyone with great emotion. "So I said briefly who the Salesians were and I referred to Don Bosco and his work, finally adding that, more than as superiors, we came as friends."

Years later, in March 1899, the College was visited by Fr Rua himself. The trip also included a visit to Porto, at the “St José” Laboratories in Lisbon (which the Salesians took over in November 1896) and the novitiate of Quinta do Pinheiro.

The history of the presence of the Salesians in the city of Braga and in the “St Caetano” is well described in the work of Fr Amador Anjos, SDB, Os Salesianos no Colégio de San Caetano de Braga 1894-1911 (Porto: Edições Salesianas, 2006).

The Salesians left the direction of the College of Braga in January 1911, after the establishment of the Republic in Portugal. Despite the short time in which the Salesians directed it, many were the students who followed the religious vocation, both in the diocesan clergy and in the Salesian Congregation.

Today the Portuguese Province of the Salesian Society is composed of 10 presences and the Provincial See. There are 93 Salesians, 61 of whom are priests, 2 deacons, 12 clerics and 18 coadjutors. They have six schools in the country on the continent, one on the island of Madeira and one in Cape Verde, on the island of Saint Vincent, attended by a total of over 9,300 students. About 9,000 children, young people and adults participate in other educational and pastoral activities, which take place in almost all presences. Hundreds of children and young people and their families also enjoy the support of Salesian Social Services.