Argentina – Rector Major: "If Mary Help of Christians is in our hearts, we shall be the Salesian Family desired by Don Bosco" 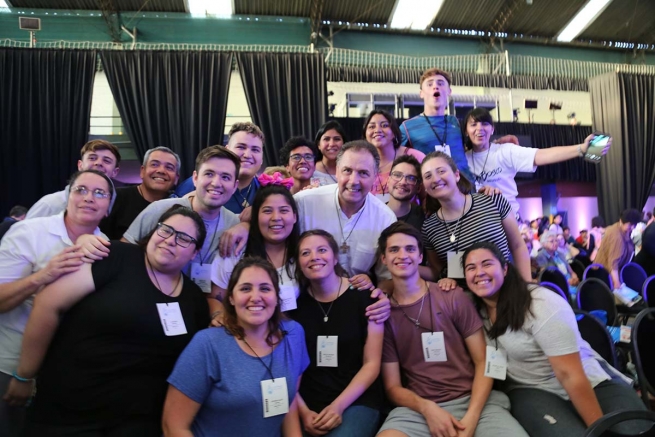 (ANS - Buenos Aires) - "We are gathered to celebrate Mary as a believing woman for young people. The whole Salesian Family knows that we are sons and daughters of Mary Help of Christians. This is why we propose Mary as a model of Christian life." With these words, yesterday, November 7, Fr Alejandro Gómez welcomed the participants of the VIII International Congress of Mary Help of Christians, scheduled until Sunday 10 in Buenos Aires, Argentina.

In an eminently Salesian atmosphere, and therefore rich in familiarity, the 36 countries participating in the event were presented, a record in the number of total registrations.

The event, which took place in the auditorium of the Salesian Institute "Saint Francis of Sales", saw several distinguished guests, including Fr Ángel Fernández Artime, Rector Major of the Salesians, Fr Eusebio Muñoz, Delegate of the Rector Major for the Salesian Family, Fr Pier Luigi Cameroni, World Head of the Association of Mary Help of Christians, the Superior General of the Daughters of Mary Help of Christians, Mother Yvonne Reungoat, and the Provincials of Southern Argentina, Northern Argentina, Bolivia, Chile, Brazil and Paraguay.

"Why did we choose the motto: 'With Mary, a believing woman, for the youth of today?' Well, we will try to give you an answer during the days of the event," said the congress promoters at the opening.

Subsequently, the Eucharistic celebration took place, presided by card. Aurelio Poli, archbishop of Buenos Aires, who in the homily said: "I am happy to participate in this event, and the presence of the Rector Major, whom I was able to meet in my mission work." He then invited those present to be aware of the presence of the Good Shepherd: "What characterizes the good shepherd is giving one's life for others"; and then he added: "When I was in the Argentine Pampas, I learned from the Salesians that to evangelize again, the Salesians return to the dream of Don Bosco traveling the world ... And when they want to renew their love for the Virgin, they talk about the dream of the 'nine years'. What a marvel of formation and education you have received from Don Bosco!"

Immediately after Mass, a group of actors represented the Salesian history and the lives of the saints of the Salesian Family who come together to love God and the Virgin in the service of the young. Later, the Rector Major offered his thoughts for the "good night", saying that Our Lady is always present on the journey of life and evangelization. He then presented two lay people and a Brazilian priest active in a mission in the middle of the forest, who testified that Mary Help of Christians was also venerated there. And he commented: "I have the conviction, that I have often experienced that the Virgin opens the way to be the mother of everyone."

More photos of the Congress on ANSFlickr