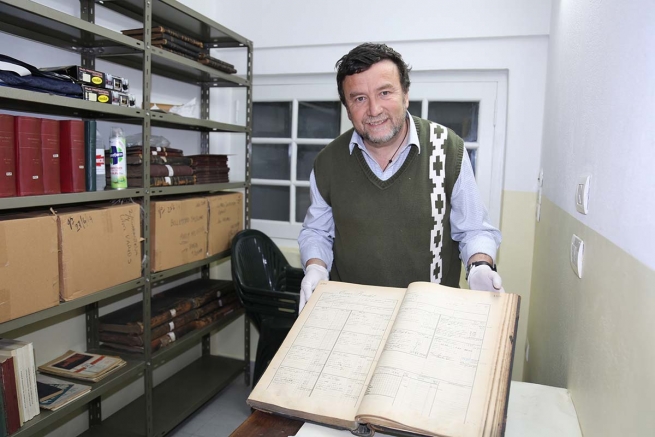 (ANS - Buenos Aires) - Anyone arriving in Buenos Aires can easily see that the blood flowing in the veins of the Argentines is not purely indigenous, but also Italian. And part of Argentina's history, and especially of Patagonia, was made by the Salesians who arrived with the first intrepid missions sent by Don Bosco. There are now over 100 years of Salesian presence and educational contributions in favor of Argentine children and young people, and there is a whole story and history printed in books, pamphlets, photographs and letters written by Don Bosco himself to and/or about the first Salesians. To preserve and enhance all this heritage, the Salesian Historical Archive of the Province of Southern Argentina (ARS) was inaugurated yesterday, November 7th.

Fr Alejandro Ángel León, Director of the institute "St Joseph the Worker" of Caleta Olivia, is in charge of this project. "It is really a dream awaited by many Salesians, which allows us to preserve our history and our past. Today it has become reality, thanks to the decision, the interest and the far-sightedness of he who was our Provincial and is today our Rector Major, Fr Ángel Fernández Artime," he said.

The creation of the ARS Salesian Historical Archive has to do with the restructuring of the Argentine Provinces in past years, which led to the erection of the one ARS constituency, formed or starting from the previous three, namely Northern Patagonia, Southern Patagonia and La Plata region. "Fundamentally, we have tried to discover the common history that unites all the Salesians of all times, because the missionaries have traveled all the spaces on which the ARS Province today extends. And therefore, starting this archive seemed to us a deserved tribute to the missionary efforts and work of hundreds of Salesians who came from Italy and of all those who spent their lives for this land and its inhabitants."

"The archive has all the historical and documentary heritage of thousands of documents written by many Salesians and some letters written by Don Bosco in his own hand," said Fr León.

Thanks to the efforts of Fr León and his collaborators - the professionals Guadalupe Morad, Soledad Urrestarazu, Pamela Alarcón and Juan Napoli - visitors can now see for themselves the glorious past written by thousands of Salesians.

The inauguration of the archive was also attended by Fr Ángel Fernández Artime, Rector Major, who gave the first impulse to its creation when he was ARS Provincial. In this way, he was able to personally admire the site where the whole history of Salesian devotion for Argentine youth is now preserved.