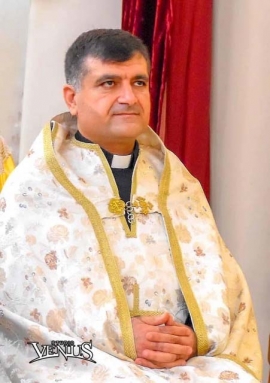 (ANS - Qamishli) - The Salesian Family of Syria mourns yet another victim: yesterday, Monday 11 November, Hovsep (Aphraham) Bedo, the Salesian Cooperator and priest of the Armenian Catholic rite, was killed while traveling by car with his father, also killed, and two other people, who managed to save themselves. The murder was perpetrated by fundamentalist militants. "The Association of Salesian Cooperators shares the pain of the family of Hovsep Bedo, who was tragically killed in an attack with his father," Fr Giuseppe Casti, World Delegate for Salesian Cooperators, said in a statement.

The Salesian Cooperator, about 50 years old, was pastor of the "Saint Joseph" Cathedral in Qamishli, a city located in the North-East of Syria, on the border with Turkey and not far from Iraq. He was married and the father of three children, two girls and a boy, the latter currently being trained in a house in Lebanon as a Salesian aspirant.

"We join in the prayer of the whole Church and of the Salesian Family for the Syrian people who, due to an interminable war, suffer injustices and suffering that injure above all the innocent and the poor. Let us pray for the Armenian Church which, in the midst of so many difficulties, continues to bear witness to the Gospel and to Christ. May the blood of this Salesian brother of ours, Cooperator, priest and martyr, be fruitful for peace and new vocations," said Fr Casti.

The double murder took place while Fr Bedo was visiting the Armenian Catholic church of Dei Al Zor "to follow a mission and check the status of the renovation works on the city church and other connected areas," said Fr Nareg Naamo, Rector of the Pontifical Armenian College in Rome and friend of the killed priest, to the SIR news agency.

Again according to the testimony of Fr Naamo, the aggression had the features of a real and proper execution, carried out because "hitting the shepherd means also hitting the flock". Fr Bedo, in fact, was driving his car, with his father at his side, with a deacon and another layman seated behind. "The car was flanked by two strangers on a motorcycle who opened fire and killed his father. Once the car stopped, the two continued to shoot, hitting the priest in the chest. The deacon and the layman managed to save themselves by rushing out of the vehicle," said the Rector of the Armenian College.

Immediately taken to the hospital in Dei Al Zor, Fr Bedo was then transferred by ambulance to  the hospital in Hassaké for more effective treatments, but he arrived already deceased.

The region of the North-East of Syria is experiencing a resurgence of hostilities these days: yesterday in Qamishli there were three attacks, one near the Chaldean church, with a toll of 6 dead and 20 wounded.