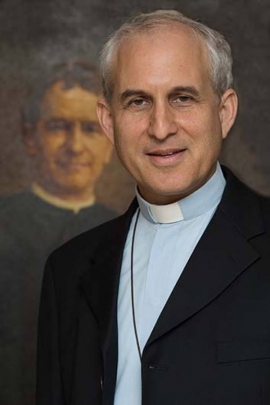 (ANS - Rome) - On the day of commemorating the departure of the first Salesian Missionary Expedition, on November 11th, in the year of the 150th Expedition, the General Councilor for the Missions, Fr Guillermo Basañes, sent, as per tradition, a letter to the elderly and sick Salesians.

"I started writing this letter in Shillong, northeast India, and I am sending it to you from Dili, the capital of East Timor. What I manage to do through tiring days of travel, uniting north and south, east and west, you manage to do much better than me, sometimes without leaving your rooms, but uniting all points of the globe in your prayer and silent offering," the Councilor for the Missions begins, renewing his gratitude to all those of his confreres who accompany the missionary activity of the Congregation through spiritual support and the donation of their own daily labors and prayers.

Subsequently, Fr Basañes recalls the great emotion of the Missionary Sending celebrated last 29 September in the Basilica of Mary Help of Christians in Turin, adding that the 36 new missionaries were not only the fruit of the Rector Major's missionary summons, but also "a fruitful outcome of your persevering prayers for the missions and missionaries."

For this reason he urged the elderly and sick Salesians to persevere in accompanying prayer. And, citing the Apostolic Letter Maximum Illud that Pope Benedict XV wrote 100 years - why Pope Francis declared October 2019 as 'Extraordinary Missionary Month' - he underlines their contribution in "ensuring that this fire continues to burn in every corner of the Congregation, which is constantly on a journey."

The letter could not close without a fraternal commemoration of the two Salesian missionaries killed in early 2019 in Burkina Faso, Fr Antonio César Fernández and Fr Fernando Hernández.

"May these two martyrs really help us to get closer and closer to the most appropriate answers to the crucial question of the next 28th General Chapter: 'What kind of Salesian...?' We could say, a Salesian living in a permanent state of martyrdom... ready to give reason for their hope... to radiate their faith, even if this preaching were to be tinged with the red of their own blood."