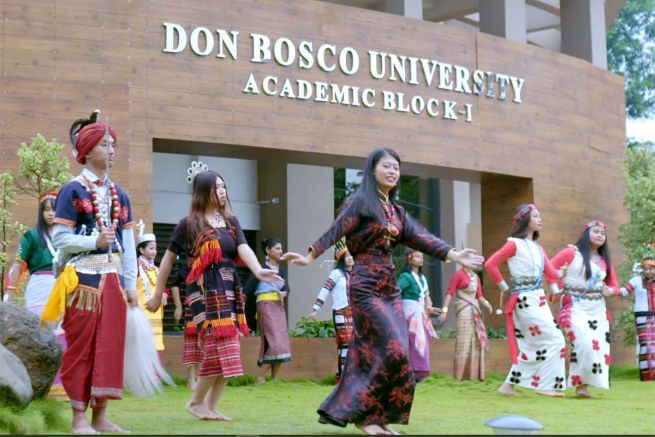 (ANS - Guwahati) - The "Assam Don Bosco University" (ADBU), India's first Catholic university, which just one year ago awarded the "University of the Year" award by the Indian Federation of Chambers of Commerce and Industry (FICCI), has been portrayed in a "mini-documentary style films" by the "BBC StoryWorks Commercial Productions". The documentary was produced as part of the "Aiming Higher" communication project promoted by the International Association of Universities (IAU) in collaboration with the BBC StoryWorks Commercial Productions to convey the importance of the role of universities in the transformation of the world.

The series of 30 mini-documentary style films of "Aiming Higher" is being presented today, November 14, in Puebla, Mexico, at the IAU International Conference. The series will be made available on dedicated website to be launched at the Conference.

IAU thanks all participating universities for their engagement and for sharing these beautiful experiences with the global higher education community and the general public. They embody what IAU is all about: collaboration, concrete action and exchange to make the movement of positive movers and shakers in higher education grow internationally and make a long-term impact on society at large.

ADBU is among the 30 positive models identified across the globe.

"We were happy to spotlight the life story of how people of Assam now have access to clean drinking water thanks to the University's efforts. It was fascinating to work on the project with the ADBU team and better understand what drives your institution ... And we hope that this film will provide you with a powerful communication tool," wrote Simon Shelley, Global Director of Programme Partnerships, BBC Global News, in an official communiquè to the Vice-Chancellor and Rector of the University, Fr Stephen Mavely.

Anxiously awaiting the launch of the "Aiming Higher" series, the Salesian answered from Puebla. "It was wonderful to admire the way this project was conceived, organized and wonderfully managed. Thank you for the excellent work."

In addition to thanking the main curators of the project on behalf of the ADBU - Dr. Juhi, Director of Human Resources; the Vice-rector, Dr. Nellanatt; Dr. Sunandan, the general coordinator; and the Director of the Department of Social Sciences, Dr. Riju – he added: "It's amazing to imagine the millions, literally millions of people around the world, that will be reached by this IAU-BBC production, people who will indeed get the message that higher education can and should be a change for the best in people's real life, starting with the closest ones. The ADBU fully shares this vision: it is written in our genes."