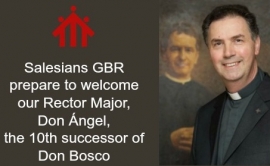 (ANS - Rome) - Tomorrow, November 19, the Rector Major, Fr Ángel Fernández Artime, leaves for a four-day Animation Visit to the "St. Thomas of Canterbury" Province of Great Britain. This is an ordinary commitment for the Rector Major, who has among his specific tasks that of animating Salesian communities throughout the world; but at the same time it is something very special: it is the last visit he will make in this six-year term, and with it he shall be able to fulfill his wish to visit all the Provinces and Vice Provinces of the Congregation during his mandate.

Fr Á.F. Artime, accompanied by his Secretary, Fr Horacio López, will land in Manchester Tuesday, late in the afternoon, and shall be off to the Salesian community in Bootle, not far from Liverpool, where he will have a first fraternal meeting with the local Salesian Family.

The following day, at the Provincial House in Bolton, he shall meet with the Salesians of the northernmost communities (Bollington, Bootle and Bolton), then visit the Thornleigh and Bollington schools, where he shall gather with the Salesian and educational community and preside at the Eucharist.

On Thursday 21, he visits the Salesian school of Chertsey and the "Royal Holloway" University, before celebrating a Mass for the Salesian Cooperators and, in the evening, he goes to Farnborough.

On Friday 22nd, there will be a meeting with Salesians and young people from the Chertsey community, after which the Rector Major meets the Provincial Council in Battersea, London, in the afternoon.

On the last day of his visit to the GBR Province, the Successor of Don Bosco will meet the Salesians of the southern communities (Cowley, Chertsey, Battersea and Farnborough); he will preside over Mass for the Salesian Family; and then have the opportunity to speak with Theresa Devereux, the mother of Sean, the Salesian missionary volunteer, killed while on duty in Somalia in 1993, to whom the GBR Province is dedicating a film.