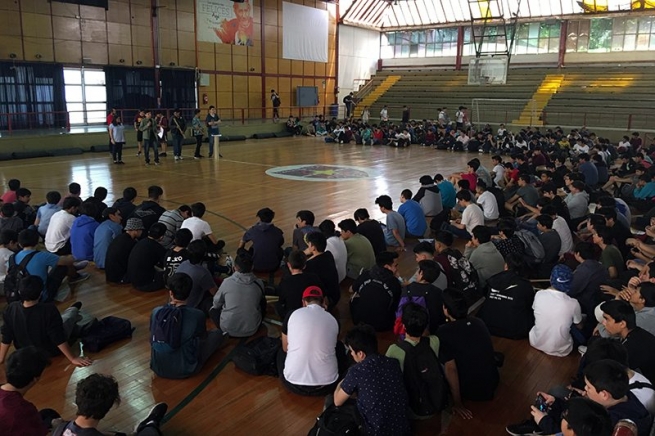 (ANS - Santiago) - On 18 October, a violent social explosion generated a growing movement of citizen participation that has changed and shall completely change the country's socio-political scenario: millions of people took to the streets demanding a radical change in the neoliberal economic model, the lifestyle of its political class and the way leaders govern.

From any perspective, it is an unprecedented fact in that it has mobilized every social strata in a global and unified manner, one in search of a single dream: a more supportive Chile, with greater social justice.

The young people of the Salesian Youth Movement, together with the youth of the Church of Santiago, coming from different pastoral areas, have created a space to reflect on this social phase Chile is going through, on the causes, consequences and future prospects, and above all on the role young Catholics play and shall play in the entire process to unfold in the country.

Thus, in a meeting held on Saturday 16 November in Santiago, there were testimonies and experiences of young people, who also shared their dreams and plans as they continue walking in the construction or re-construction of the country.

Under the motto "The Chile we dream of", the meetings will continue to encourage dialogue, reflection and discernment among young people. On this occasion, there were proposals relating to "a new pastoral care for today's Chile", "the socio-political commitment of young Christians", "the importance of prayer", "ongoing formation in a key to the maturity of faith" and "the opening of spaces for dialogue and discernment together", all themes that shall be further developed, with the invitation also to anyone who, even of different spirituality, wishes to contribute.

This is a broad movement that also involves other Salesian works in the country. For example, already on Saturday 9 November, in the Salesian house in Alameda, more than 400 young people had held a meeting called "the Chile that I desire", in which the origin and forms of solving the current social-political crisis were similarly discussed.

So, too, the Salesians of the city of La Serena; they set aside days for reflection in which the educators addressed the topic they discussed with the students in their classrooms and developed an Emotional Containment Plan, wherein everyone could express their feelings and reflect on this social explosion.

"Chile has awoken to find itself facing the unjust life we ​​have lived, on a political, economic, health and educational level. We have to bring out the positive side, not remain with the negative side. Always with a Christian attitude, because we cannot join the looting or robbery. As Don Bosco thought for all his Salesian Family, we have trust in our young people, protagonists of our education, to make them good Christians and to lead them to be upright citizens. We must pray for what is happening, for God to help us and strengthen us, so that Chile is a paradise where we can live in peace and equality," said Guido Torres, a religion teacher and pastoral secretary.