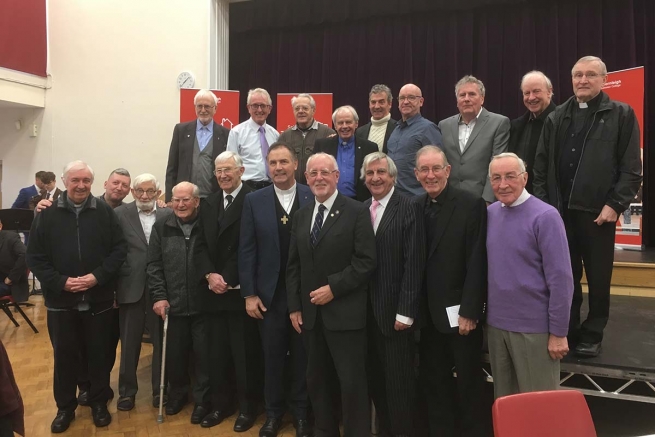 (ANS – Bolton) – During his visit to Bolton, the Rector Major, Fr Ángel Fernández Artime, rededicated the recently refurbished chapel at Thornleigh Salesian College, in a beautiful prayer service created by the students and staff.

Fr Ángel told the assembled congregation of students and guests that he was delighted to be told that most of the students are learning Spanish. He said he was also pleased with the focus in the service on the words “Home, School, Church, Playground”, because these words sum up Salesian life and the environment Don Bosco wanted for his young people, and told the students and staff he felt they were embodying the Salesian spirit.

Guests included the Bishop of Salford, the Right Reverend John Arnold, many past pupils including Shrigley Old Boys who had travelled from Scotland, Salesian Cooperators, and Sr Mary Treacy FMA, who also travelled all the way from Glasgow, just for the day.

In the lead up to the rededication, students spoke movingly about the role of the chapel in the life of the school since its establishment in 1925, as a place of peace and solace, and the scene for receiving the sacraments of Reconciliation and Holy Communion. They also referred to the many Salesians who have made their professions here, and been ordained, and those whose funerals have taken place in the chapel. The present building was dedicated to the memory of past pupils who gave their lives during the war. The choir then sang “This is Holy Ground”, as the plaque commemorating Fr Ángel’s rededication was brought to the altar.

After the service, students, staff and guests joined the Rector Major in the school hall for refreshments, with the talented students providing musical entertainment. Fr Ángel had said he was very inpressed by their performances, and at the end of the gathering, he and Fr Horacio López, his secretary, led the students in singing a few songs, to the great delight of everyone present.

The Rector Major presented Fr Mervyn Williams SDB with a gift thanking him for his service as Province Economer over the past 18 years.

Fr Ángel is now on his way to Savio House, our Youth Retreat Centre in Bollington, Cheshire, where he will meet the community including the gap year volunteers, and learn more about the work of Salesian Youth Ministry in GBR Province.