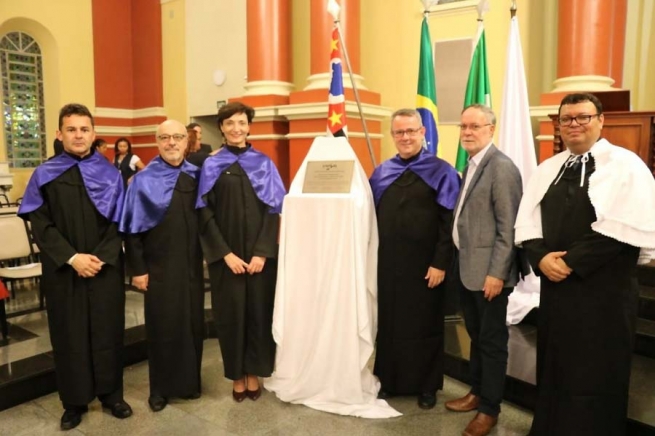 (ANS - Piracicaba) - The Salesian University Center of São Paulo (UNISAL) can now count on a new Unit, in the city of Piracicaba. The "Dom Bosco" Salesian Faculty of Piracicaba has become part of UNISAL: Unit of Piracicaba, Assunção Campus.

The unification was made official on October 22nd with Act n. 480, published in the Official Journal of the Union.

To celebrate this moment, an Eucharist was held in the Church dedicated to the Assumption of Mary on 7 November, followed by a solemn session to seal the beginning of the academic activities of the new unit.

The Mass was attended by priests working in the university institutional mission, representing the various UNISAL units: for the Unit of Americana, Fr José Adilson Morgado; from that of Lorraine, Fr Sergio Baldin Júnior; and for the new Piracicaba Unit, Fr Alcy Maurício.

Similarly, the honorary session with which the new unit began its academic year was guided by the institutional authorities of UNISAL, led by Fr Luís Otávio Botasso, Director-President, and Fr Eduardo Capucho, Rector.

During his speech, Fr Botasso referred to a key element of Salesian education - to form "good Christians and upright citizens" - and he indicated Fr Ronaldo Francisco Aguarelli, parish priest of the Cathedral of St. Anthony in Piracicaba, and the mayor of Piracicaba, Barjas Negri, as valid models.

The Directors, the Coordinators and the teachers of all the UNISAL units, as well as the technical-administrative collaborators of the Rectorate and of the different units also took part in the event.

Finally, the Director-President and the Rector of UNISAL unveiled the memorial plaque of this event, which was then posted at the entrance of the new building of the unit, and the ceremony ended with a moment of fraternal agape.