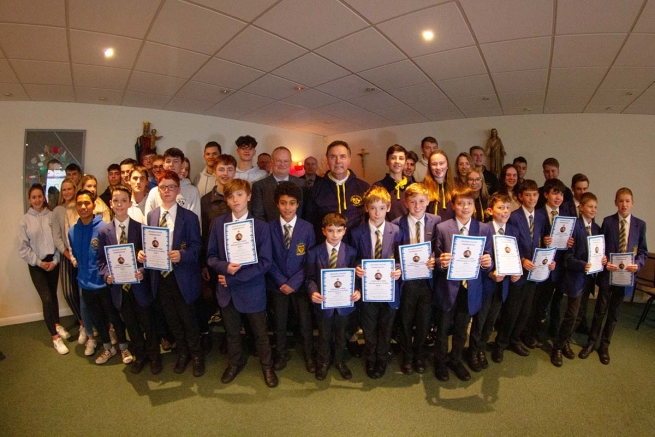 (ANS - London) - The Rector Major's Animation Visit to the "St. Thomas of Canterbury" Province of Great Britain ended on Saturday, November 23rd, in London, at the center of Battersea. With this visit, Rector Major Fr Á.F. Artime brings to a close the Animation Visits for the 2014-2020 term.

On Friday, November 22, the Rector Major visited the Salesian community in Farnborough, Hampshire, spending about an hour and a half with his confreres, animating them in the service and answering their questions. Then he went to the local Salesian Institute, where he met students, and presented the prizes to those students who took part in the "Don Bosco Projects" initiative.

On this occasion, Fr Á.F. Artime also expressed the closeness and empathy that every Salesian, follower of Don Bosco should have, and he spoke about technique and manual skills with the young Brian Soloman, who is competing in the British national team in the competition to resolve the Rubik's Cube faster.

In the evening, having reached the community of Battersea, London, and flanked by the Councilor for Central and Northern Europe, Fr Tadeusz Rozmus, he presided at the meeting with the Provincial, Fr James Briody, and his Council.

On Saturday morning, the last day of his visit, the Successor of Don Bosco still had time for a fatherly dialogue with the Salesians of the Cowley, Chertsey Farnborough and Battersea communities, for the occasion all gathered in this latter work; and then he had a moving meeting with Mrs Theresa Deveraux, mother of Sean Deveraux, the Salesian volunteer killed in Somalia in 1993, who has become a model of dedication and service for all Salesian youth.

Accompanied by his Secretary, Fr Horacio López, the Rector Major returned in the afternoon of Saturday 23 November to Rome. Now, before him, he has a week of ordinary work, before starting, next week, from Monday 2 December, the Winter Plenary Session of the General Council, which will continue until the end of next January.

And, then, the 28th General Chapter is already on the horizon, an event which will begin in Turin on February 16th.