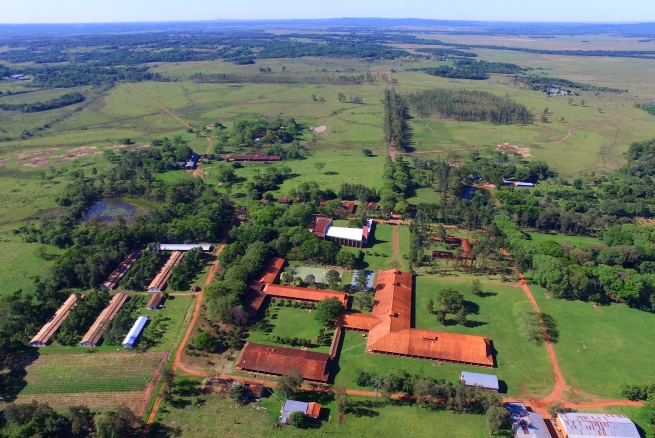 (ANS - Coronel Oviedo) - The "Carlos Pfannl" Agro-Pastoral Institute celebrated its first 65 years a few days ago: it was November 21, 1954, in fact, when the blessing of the cornerstone of the then "Carlos Pfannl" Agricultural School took place, located in the Blas Garay neighborhood, Compagnia Santa María, in the city of Coronel Oviedo. This Salesian work, which bears the name of one of its benefactors, was founded with the young people of the third year of the Salesian Agricultural School of Ypacaraí. At the time it extended over about five thousand hectares of forests and fields.

Fr Guido Coronel, a Salesian, dedicated himself to the construction of the gigantic and current Agro-Pastoral Institute of Coronel Oviedo, where he had the large parish dedicated to Mary Help of Christians erected. It is a privileged land, with productive resources and an optimal position for cultivation and breeding.

The institute is located about 140 km from the national capital, Asunción, and was born as a response to the needs of young people in rural areas, to offer them skills that can be used in the world of work, according to the needs of the area. At the beginning, the center was dedicated to the training of Rural Operators and Agronomists; but since 1970, it has been offering its students Baccalaureate courses in Agro-pastoral and Forestry Techniques. Furthermore, since 2004, the Salesian Agro-Pastoral Institute "Carlos Pfannl" has also opened its doors to girls who wish to pursue this field of study.

The reputation of the institute's quality is known throughout Paraguay, and every year students from every part of the country, who besides receiving technical skills, are also trained to become good Christians and upright citizens.

Furthermore, the institute's management has always been committed to improving the center's programs so as to offer the best to both students and the rural local communities: for this reason, over the years they have been able to create projects for the reduction of poverty and the improvement of producers' living conditions.

It is currently one of the most important Salesian works in Paraguay, thanks to its valuable contributions to the formation of young people in rural areas as agricultural technicians, as well as the support it offers to neighboring schools and the formation of the local population.