Japan – “Protect All Life”. A sharing on the Pope's Pastoral Visit 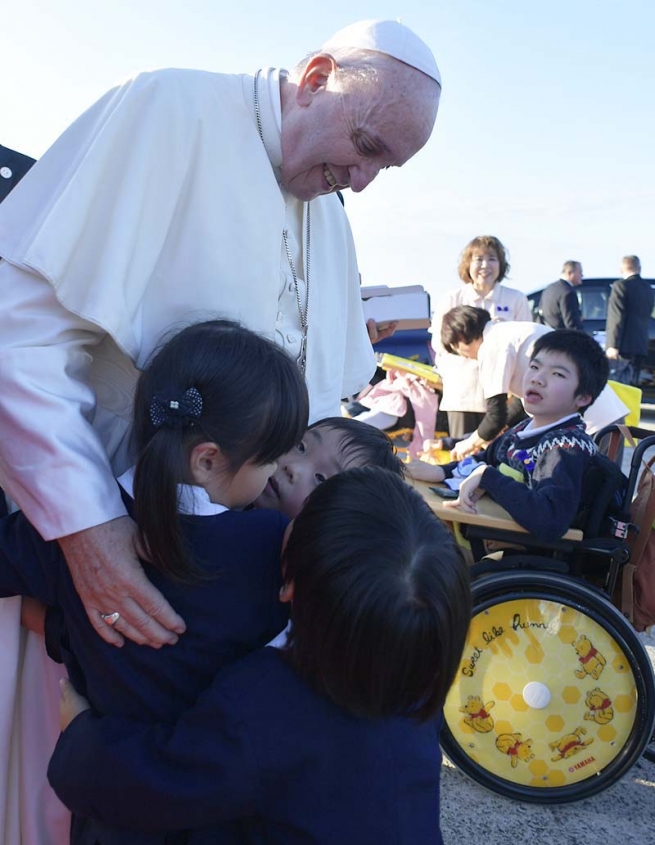 (ANS – Tokyo) – The Pastoral Visit of Pope Francis to Japan was held from November 23rd to 26th. The Pope, who was eager to mission in Japan when he was a seminarian, with the authority of Jesus Christ met many people on a hard schedule here in Japan and had the opportunity to share and pray together. Here Mr. Chihiro Okawa, a Salesian Past Pupil, shares how he lived this experience.

My SNS is now full of posts of my friends about the Pope’s visit. Yes. We can't help sharing. I have been a Catholic in Japan for more than 10 years, and this visit became the No.1 special opportunity in these 10 years for the small community of the Catholic church in Japan. The heart of believers has burned so much that it has been socially recognized and has sympathized with many people. I am deeply impressed not only by the Pope's great faith in Jesus, but also in a way of life full of mercy and joy, and a strong determination to peace, and I am now in a state where I cannot suppress my impression.

The Pope often stressed the importance of staying close to the people, especially those who are in a weak position always with mercy as a standard of action, based on the current social situation in Japan. That was actually shown through actions at encounters with survivors of the Atomic Bomb in Nagasaki and Hiroshima and the Great East Japan Earthquake, and meetings with young people. At the mass at the Tokyo Dome, the Pope clearly stated the reasons for being close to those people. “Because Jesus hugged a sick man and a sinner and forgave a thief who was crucified.”

Faith is not just sticking to old traditions and forms but living in the same way as Jesus Christ while feeling the living Christ. In other words, we must be aware to be interested in people in weak positions in front of us, to stand close together, listening, sympathizing, and trying to move in a better direction. In Salesian terms, I think he pointed out the importance of “Assistenza”.

I felt that the Pope taught us that Jesus is not far from us through his kindness and standing with people.

The opposite of mercy is to be self-centered, selfish. Therefore, the Pope also says that mercy should extend to nature, a gift from God, and to the entire creation. It made me consider a lot because I witnessed the negative effects of climate change these days in Japan.

2) Joy – love with an open heart, and being loved

The Pope is 82 years old and should be tired from the forced schedule, but he spent the days in Japan, always smiling in front of us, blessing the babies with his kiss, and sometimes with jokes and humor. That grabbed the hearts of many people.

Why does the Pope attract people so much around the world? The keyword is “joy”.
Our founding father Don Bosco was a saint of joy. In the same way, this time I was able to realize that the Pope is a joyful person. This joy never disappears in any difficulty. I think this is what makes the Pope close to us.
One of Don Bosco's famous words is that “It is not enough to love the young, they must know that they are loved”. If a person truly loves the other person, he will be loved.

The Pope sent messages during this visit to Japan, not only for Christians but also for those who believed in other religions or those who don’t believe in any religion. He spoke repeatedly about the importance of dialog and collaboration with joy and an open heart, that is, loving while accepting differences. I think he is hoping the Catholic Church and believers in Japan to go beyond the logic of the church, go out into society more and become widely loved.

The Pope visited Nagasaki and Hiroshima, both A-bomb sites. In the two places where he felt obliged to visit, he expressed the passion for the abolition of nuclear weapons and unwavering commitment to peace, calling us all responsible. We were strongly encouraged to recall always past mistakes, to walk together and to take action actually to protect the peace.

In the past, Don Bosco was told by Jesus in his 9-year-old dream that illuminated his life, "Don't swing your fist wildly. With meekness and charity, you will conquer these your friends." Thus, in any case, he denied pressing down people with power and preached the way to be friends with people through kindness, love, and reason.
The Pope then prayed a prayer of St. Francis of Assisi at the Nagasaki meeting. At the gathering in Hiroshima, as a “pilgrim of peace,” he said, “True peace is nothing but unarmed peace.” This is exactly the peace that God wants, also mentioned by the saints of the past, and the peace that we should realize in the midst of people beyond ideology.

It seems that it is not so easy to achieve peace through kindness. We may have doubts, our hearts may be broken, and give up. However, the Pope taught us that instead of making excuses for peace, it is something that should be pursued in a simple and straightforward manner, imagining humans (their sufferings and sorrows). And I realized once again how valuable it is to change our mind, pray as one team, and continue to hope.

My four-year-old eldest son saw Pope Francis this time and said, “I was so touched and almost started to cry. I love Papa!” I hope that I will continue to be close together with the young people as an adult so that the seeds planted through the visit of the Pope to the young and children who will lead the future will grow someday and bloom beautifully.