Eritrea – Foundations set for birth of Association of Salesian Past Pupils 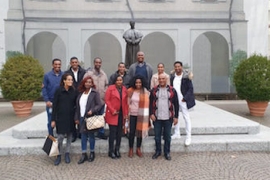 (ANS - Asmara) - In a country where a boy cannot imagine a future for himself, or draw a life plan, where even dreaming is, sometimes, useless, having known Don Bosco can be the keystone of one's life, that element that allows you to give a new direction to your future. For this reason, some Past Pupils of the Salesian schools in Eritrea have decided to protect, enhance and promote this "added value" of their lives and decided to start the Past Pupils Association in their country, too.

The first step for this ambitious project was made in Turin, on November 2 and 3, when a dozen Eritrean past pupils met with Fr Petros Abraha, Delegate for the Eritrean Delegation, committed to keeping relations between his compatriots in the diaspora.

A meeting between old school friends, united by having left their land to try to make use, in a condition of freedom and security, of the skills acquired in Salesian vocational training schools. Forced to look for asylum far from their villages and cities, the meeting's ten participants had to overcome another border: that of being welcomed in Europe. It was not easy to go beyond the status of foreigner in which they found themselves in different countries: United Kingdom, Germany, Switzerland, Sweden, Norway. The first difficulty was the language, although their scholastic English they practiced in Eritrea was found to be very valuable to enter the world of work. Today, they have the opportunity to support themselves and their families and to send money back to the families left behind.

But it was not just a reunion between schoolmates. The choice of the meeting's venue, in Turin-Valdocco, was motivated by a specific purpose: "To make the place where everything began known," explained Marco Faggioli, of "Missioni Don Bosco" of Turin, which sponsored the initiative. "Everyone became aware of being helped by Don Bosco, and they wanted to know more about where the thrust of the Salesian charism comes from," said Fr Abraha.

Unfortunately not all those who had booked were able to participate. However, with those who had come, a historic decision matured: "We have decided to give life to a network among the Eritrean past pupils." The decision arose among the participants themselves and the purpose is to lend a hand to their brothers in Eritrea: support for professional paths, sharing of experiences on the most requested specializations including abroad, advice on how to avoid relying on human traffickers.

At the end of the meeting one of the past pupils said that as Don Bosco sent missionaries from Turin, they too felt they had to grow as missionaries among their brothers. And as a natural epilogue to this historic meeting it was decided to meet again in August next year.