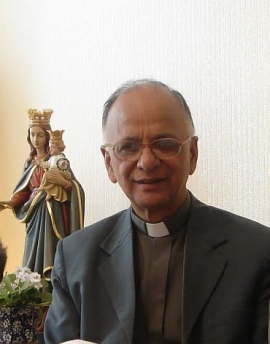 (ANS – New Delhi) – The Delhi-based International Human Rights Council has announced an “Ambassador for Peace” Award for Archbishop Thomas Menamparampil Emeritus of Guwahati. The Award will be conferred on 9th December 2019 in New Delhi in the presence of invitees from all over the country and abroad. One of the earlier recipients of the Award is the Dalai Lama among many other internationally known figures.

International Human Rights Council is one of the world’s leading independent organizations dedicated to defending and protecting human rights. By focusing international attention where human rights are violated, the organization gives voice to the oppressed and hold oppressors accountable for their crimes.

Surprised by the news, the prelate dedicated the recognition to the members of his team: “I have never worked for awards. I am the last person to worry about these things, but I accept them when they happen, as an encouragement to my colleagues, who are the real winners,” he said.

Though a Church man, Salesian Archbishop Thomas believes in social activism and is a firm believer of peace building and social harmony who often repeats, “Peace comes when all of us recognize that we need each other.”

Mgr. Menamparampil is a key figure in the peace process in India, particularly among the ethnic groups of the State of Assam, in North-East India. For him, the best method of evangelizing in Asia is to “whisper the Gospel in the soul of Asia”, becoming mediators between the various positions and cultures and promoters of a sincere dialogue between the parties, which can only happen through mutual knowledge, respect and through a “hint of sympathy in the heart.”

“I was drawn into it [peace building] in 1996 when almost two-and-a-half lakh people fled into relief camps around Kokrajhar [Bodoland] having lost their dear ones and property,” recalls Archbishop Menamparampil. Without hesitation the soft spoken archbishop adds, “Fortunately, like-minded people came together to help from different Churches and communities.”

“It was a people’s effort, of joint action,” he says. With the encouragement and support of the State Government and the general public, relief work made progress and an atmosphere for peace was created.

It was on that occasion that the “Joint Peace Mission Team” was born, he being among its promoters and with which he still works today, to support local harmony. For him peace is possible, through prayer and commitment, in all contexts and at all levels.

Archbishop Thomas admits, “After that experience, I was called to help in several other instances of conflict in the region where ethnic violence had taken away several lives, destroyed houses, and caused immense suffering to people.”

“My contribution was small,” he insists, “but those who were working for peace in those contexts have greatly valued our initiatives.”

The eighty-three year old Archbishop Thomas took office in 1992 as the first Catholic bishop of Guwahati. Prior to that, he had been the bishop of Dibrugarh for eleven years. Earlier, he was in the field of education, working for many years in the Don Bosco Technical School, Shillong, and St. Anthony’s College. Several of his students have emerged as prominent leaders in Northeast India and at national levels.

Of late, he has been invited to several universities in India and abroad to speak on themes like inter-community understanding, healing of historic memories, and the arduous path to peace. He made a very useful contribution at the World Congress of Philosophers last year in Beijing.