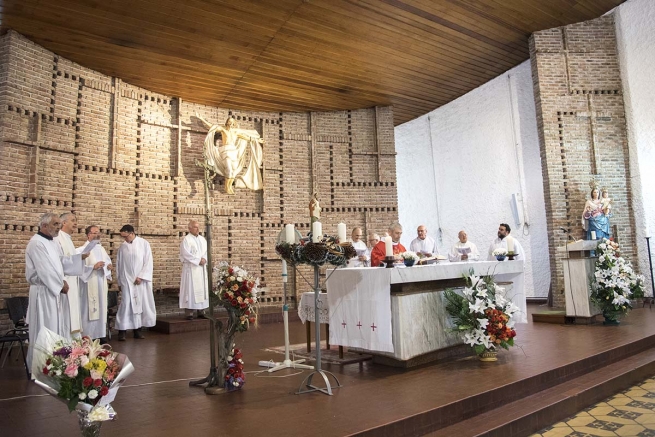 (ANS - Montevideo) - The "Mamma Margarita" Association, an association of mothers and fathers of consecrated Salesians in Uruguay, celebrated its 30th anniversary on 30 November. For the occasion, the Provincial, Fr Alfonso Bauer, presided over a solemn Eucharist concelebration in the "Our Lady of the Rosary" chapel of the "Saint Francis of Sales" Institute, during which he recalled the origins of the association and of the history of Mamma Margaret.

In the homily, Fr Bauer reviewed the genesis of this association, born of an uneasiness of Carmen Topolansky, mother of Fr Martín Lasarte, SDB, the latter for years a missionary in Angola and today active in the Sector for Missions in Rome. The woman proposed to the then Provincial, Victor Reyes, to form this organization and to convene a first meeting.

For his part, the then Rector Major, Fr Egidio Viganó, immediately blessed the initiative, stating: "If my mother were alive, she would be the first to enroll." The fundamental objective of the association lies in "gathering, accompanying, forming and helping the parents of those who are called to consecrated life, so that they know how to accompany their children and pray for vocations, fidelity and perseverance."

"Sometimes," continued Fr Bauer, "the misunderstanding, confusion and negativity in which some parents may find themselves are shared with others who lived those same experiences 'yesterday' and who 'today', instead, live the vocation of their children as the greatest gift of God to the family." And he also reported that when Lasarte's mother conceived this idea, she had said: "If we mothers could get to know each other, we would not feel alone, helpless, with so many needs, we would have another vision of our children's vocation ...".

"Being a father and mother is a vocation and every vocation is a call from God to fulfill a mission," he added, specifying that the mission of these fathers and mothers is "at the service of the full life of their children, to allow them to reach their fulfillment in all the orders of life, such as the choice of state, employment, studies ... ".

Today, the Association is also present in other parts of the world such as Argentina, Mexico, Nicaragua, Chile, Italy and South Korea.

"Mamma Margarita is the foundation, the heart of the association; she was the mother of the first Salesian, Don Bosco. Imitate her, so that all our daily work becomes prayer and we live the mission of accompanying our children," urged the Superior of the Salesians in Uruguay.