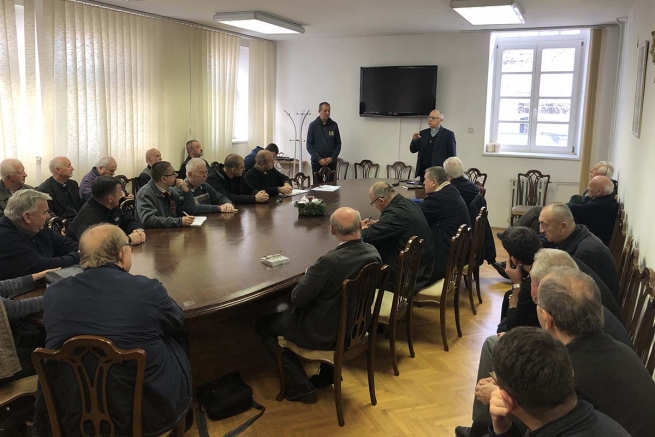 (ANS - Zagreb) - On 30 November last, the General Councilor for the Salesian Region of Central and Northern Europe, Fr Tadeusz Rozmus, completed his Extraordinary Visitation of the "St. John Bosco" Province of Croatia with a final meeting at the Provincial House in the Knežija district of the capital, Zagreb. The meeting was attended by 35 Salesians, who came specially from all parts of Croatia as well as from Bosnia and Herzegovina.

Conducted by Fr Rozmus on behalf of the Rector Major, the Visit began on 26 October in the same locality. During the five weeks spent in the Province, the Regional Councilor reviewed all the Salesian houses, met with the religious, the members of the Salesian Family and the laity who participate in the same mission, as well as with the many young people present in the schools, in the parishes and oratories.

In his concluding speech, Fr Rozmus thanked the Provincial, Fr Tihomir Šutalo, the members of the Provincial Council, the Directors and all the religious, especially those who prepared the Visit at the provincial level, as well as in the local communities, making a transparent presentation of the main characteristics of after-school educational activities.

With the question "Quo vadis, Croatian Province?", the Councilor presented an objective and global vision of the current state of the Province. He stressed the importance of initial formation and its strengthening, pointing out that this is a fundamental question, which is reflected in the providential increase in vocations, in the appreciation of Salesian publications, and in a well-directed Youth Ministry that can foster an increasingly decisive option towards poor young people.

He also emphasized the need for a reduction in current presences, creating new ones that are typically Salesian. Among his recommendations there were also: a more active international collaboration in the "Project for Europe"; the care of the missionary vocation; transparent management of economic resources; professionalism and solidarity to try to achieve the works' economic self-sufficiency.

Speaking of the future of the Province, he recommended strategies and concrete projects, at a personal and community level, and an investment in the quality of fraternal life, in the formative field and in youth ministry.

In the second part of the meeting, the Salesians present were divided into small groups and they examined - in depth - various observations and specific aspects of the Extraordinary Visitor's report.