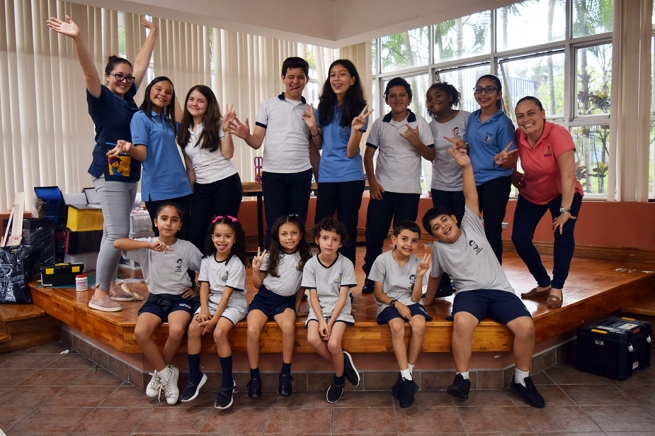 (ANS - Alajuelita) - The Don Bosco School is part of the "Don Bosco Salesian Educational Center" (CEDES) and serves a population of 400 students. In accordance with the Salesian charism, the school has the firm intention of offering excellence in all its educational activities. In recent weeks, its young students have participated in two projects: the "First Lego League", a science, technology and robotics competition, and the development of a project called "Quimera".

On November 16th, the fourth edition of the "First Lego League" was held in Costa Rica, a science, technology and robotics competition that aims to enable children and young people to face the challenges of research and critical thinking development.

500 students from different schools participated in the activity. "CEDES Don Bosco" was represented by 16 students from the areas of the Infants' Center, of the Technical School and of the Institute. The team of children from the "Pasitos Pequeños" Infants' Center designed two cities that reflect emotions, colors and fun as a solution for a city of the future. The second team composed of students of the School obtained an honorable mention as "Creative Project" for the proposal of an "eco-friendly" residential complex with accessibility and "ecoterraces" to encourage sharing among families.

The other project prepared by the students was the creation of the application called "Quimera" which aims to contrast school abandonment. Created by five students of the "CEDES Don Bosco", the project was a finalist in the regional competition "Latin Code Week", promoted by "Junior Achievement".

"Quimera" is a cross-platform application and is currently competing for first place with 10 other apps from various countries. This application was developed by the young Pablo Bermúdez, Melanie Arista, Ángel Ureña, María Rivel and Joel Ávila. Through games and tests, it motivates young people to enjoy study and reinforce learning interactively.

The objective of "Quimera" is to interactively link academic subjects and schools, allowing students to gain greater knowledge of the subjects, tackling them in a more dynamic way. Moreover, it will allow teachers to appreciate, through the application, the progress of the children, all in order to reduce the early abandonment of school.

According to data from the Ministry of Public Education of Costa Rica, in 2018, 10,211 students left secondary school.

If the "Quimera" project wins its competition, it could become an excellent instrument of contrast at the Latin American level, given that early school leaving is high.

It is still possible to vote for this project: https://latincodeweek.org/