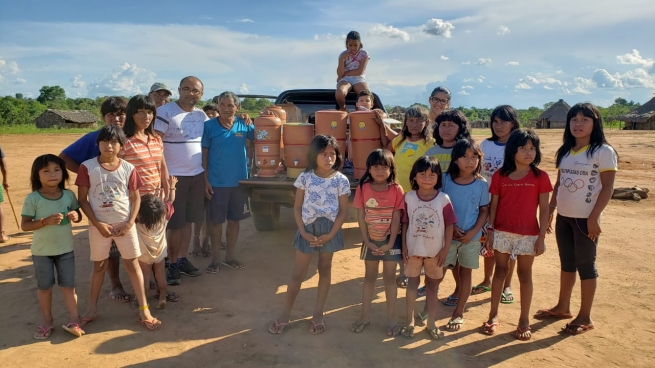 (ANS - Campinápolis) - About 9,000 people, all of them Xavante, live in the 180 villages served by the Campinapolis Missionary Ministry.  In that region, in the eastern part of the State of Mato Grosso, the rainy season is in progress, which relieves the intense heat and brings other benefits to the vegetation, but also causes health problems to the local population.

Nurse Géssyca Santiago is the head of indigenous health in the village "Cuerpo de Cristo", where about 100 people live, and she has detected a serious health problem. "We have seen that cases of diarrhea in the community increase during the rainy season, because the river water, which they use for drinking, cooking, bathing and washing clothes, is very dirty and muddy."

The inhabitants of some villages near Campinápolis already enjoy the water of artisanal wells, some made by teams led by the Salesian Alois Würz, of the AMA Project, and others by the Special Secretariat for Indigenous Health (SESAI). But the families of the village of "Cuerpo de Cristo" continue to survive only with water from the São Felipe river, which runs through the region.

To deal with the problem - which can only be fully solved by supplying treated water to the population - pastoral agents have produced a series of guidelines on how to proceed in using the water collected from the river. First, information and spoons were distributed so that they could learn how to make whey - used for the treatment of the disease; then clay filters were distributed. These two initiatives managed to contain the cases of diarrhea.

Salesian deacon José Alves said the material was obtained through donations from benefactors and friends who work for indigenous peoples.

"It's very sad that when we arrive in the village we see malnourished children and we cannot do anything. We leave with an anguished heart. We fight so that children do not suffer from malnutrition, because once it is diagnosed, it is difficult to resolve," says volunteer Deusmira Moreira.

At the ecclesial level, the indigenous peoples of Campinapolis are part of the parish of "San Domenico Savio", whose parish priest is the Salesian Fr Bartolomeo Giaccaria. The participation of the Salesian Mission of Mato Grosso is acknowledged and appreciated by the community and the authorities. "It is a joy to be able to count on the support of the Salesians and of the health teams. Without this support, we are nothing," explains Moreira.

"I really want to thank the Salesians. With this help, we can do more and more. It is a great honor for me to be able to save lives. Not only those of children, but also of pregnant women and the elderly," reiterated Deusmira.