Spain – "Malaga is a good land to establish our style, Don Bosco wants this place": 125 years of Salesian presence 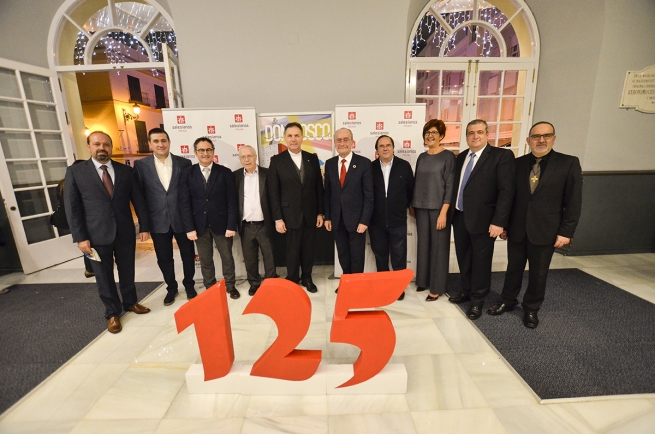 (ANS - Malaga) - "Being in Malaga is like being in another Valdocco. We must thank Don Bosco and his Mother for having shaped this dream," said the Rector Major, Fr Ángel Fernández Artime on the occasion of the celebration of 125 years of Salesian presence in Malaga.

In recalling the history of the Salesians' arrival in the city, the premonitory words of Fr Michele Rua, the First Successor of Don Bosco at the head of Congregation, came to mind. "Malaga is a good land to establish our style, Don Bosco wants this place and a great future starts here."

The Salesians have been present in Malaga since 1894. The 19th century was difficult for the city: economic regression, misery, illiteracy and social upheaval were the predominant features. As soon as they arrived, the Salesians brought their educational and pedagogical style and took care of the "San Bartolomé" school, whose first Director was Fr Epifanio Salvatore Fumagalli. Another important event for this city was the canonical coronation of the statue of Mary Help of Christians, the first to be performed in Spain and the fourth in the world.

There were celebrations and thanks to God given during the past weekend, with the participation of Fr Ángel Fernández Artime, Rector Major of the Salesians.

On Saturday 7 December, the act of welcome to the Rector Major, accompanied by his Secretary, Fr Horacio López, by Fr Ángel Asurmendi, Superior of the “Spain-Mary Help of Christians” Province, Fr Antonio Gil, Director, and with the representatives of the groups of the Salesian Family. "We enjoyed an intimate, familiar and emotional moment. 'It's forbidden to complain', he told us and invited us to continue dreaming and keeping the Salesian charism alive in our home," participants said.

Two important moments marked the 125th anniversary celebration. One was the festive celebration in the grand Cervantes Theater, one of the city's oldest, where "Don Bosco, the musical" was represented - a work that gives an account of the brilliant insights born from the pedagogical anxiety of the dreamer and great Piedmontese educator; the second, the celebration of the solemn closing Mass of the anniversary.

"The most important thing is the Salesian charism of this house. It is the Salesian life that is lived and breathed in these 125 years of Salesian presence in Malaga. I invite you to continue dreaming like Don Bosco," said the Rector Major.