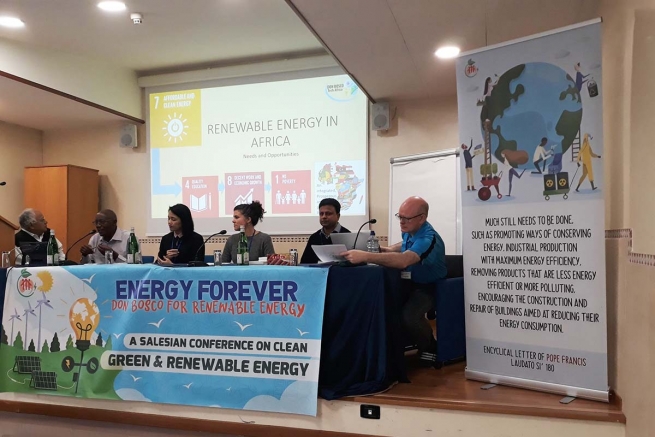 (ANS - Rome) - At the end of the international Salesian conference on clean, renewable green energy, entitled "Energy Forever" - Rome, November 26-27 - representatives of various NGOs, Mission Offices and Salesian institutions of around 20 countries from all over the world, led by the Congregation's Economer General, Salesian Brother Jean Paul Muller, and by the General Councilor for the Missions, Fr Guillermo Basañes, drew up and signed a final Declaration, which contains specific commitments on the protection of Creation in terms of care of and for the "common home" that the Salesian world fully feels its own, and not just from today.

“For our young people, it is a matter of their very survival,” says Bro Jean Paul Muller, the Economer General of the Salesians, speaking of climate change. Since many years, the Salesian Congregation has been conscious of the problem of the environment. The movement named DON BOSCO GREEN ALLIANCE worked on this theme at the educational and awareness level. The Institutions and Provinces adopted concrete practices that reduce pollution, promote recycling and encourage the use of solar energy. The encyclical, Laudate Sì added impetus to our work in this line.

And that is why last November, the Economer General's Office and the Sector for the Missions promoted the "Energy Forever" conference on green, clean and renewable energy.

“The timing of the conference is perfect,” says Fr Basanes, “as the topic is in perfect harmony with the theme of General Chapter 28 – Which Salesian for the youth of today?” This conference, named ‘ENERGY FOREVER’, concluded in Rome on 27 November 2019 with a statement requesting the entire congregation to give ‘Climate Emergency’, as Pope Francis calls it, the urgent attention that our young people want us to.

This final statement or appeal of the conference can be found on this website, in English, Italian and Spanish.

A record of the vast amount of work already being done by the Congregation in the field of renewable energy also can be found here.

More information about the vast movement DON BOSCO GREEN ALLIANCE (which now has over 200 Salesian institutions as members) can be found at www.donboscogreen.org

For more information about the conference and/or the resources shared at the conference, write to This email address is being protected from spambots. You need JavaScript enabled to view it.