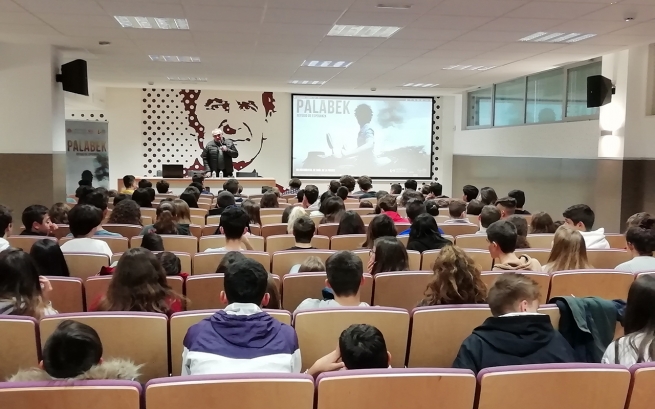 (ANS - Madrid) - Two months after the premiere of the documentary Palabek. Refugio de esperanza, of "Misiones Salesianas" and "Jóvenes y Desarrollo", already about 20,000 students of Spanish high schools, bachelor's degree courses and Salesian Vocational Training centers have participated in the documentary's screening and listened to the testimony of missionary Salesian Fr Ubaldino Andrade. The students have thus come to view and understand the difficulties of the refugees and in many cases they engaged in solidarity initiatives.

The Salesian says: "The camp is like the courtyard of your school, but you can't leave it, and 100, 200, up to 300 thousand people live there. Palabek is a settlement of 20 square km, where each family receives a plot of 30 square meters to build its hut and sow something there."

But the war conditions everything: "Those who reside there are people who have fled war and certain death. They have left their lives: family, work, clothes, home ... They arrive with nothing to start from scratch and then have to survive with difficulty just to have a little water, they are without money and with insufficient quantity of food, which is given to them once a month and is always the same," adds the missionary.

In the village there are mostly women and children, often escaping from war, having to walk at night up to the border. "But despite everything, they are always happy, they smile, they want to talk, they greet you, they share what little they have and the younger ones appreciate the education they receive," he says before the astonishment of so many youngsters. The children of Palabek do not have to take anything to school, he adds, because there are no pens, notebooks or backpacks, in some cases they have to travel many kilometers on foot to attend classes. But the Salesians offer breakfast and food to all the children who attend the settlement schools, around 13,000 in number.

Finally, the Salesian missionary recalls four ways of helping the Salesians and refugees in Palabek: "The first is through prayer, which does miracles; the second is to understand and convey the message that when we talk about refugees, migrants or unaccompanied minors, we're not talking about suspect persons, thieves or terrorists, as some say, but they are people who have fled to save their lives; the third way to help is with money or solidarity initiatives, such as writing letters in English for the children there, or recording a video and sending it through ‘Misiones Salesianas’ or ‘Jóvenes y Desarrollo’; and the fourth way, for those who are a little older, is to go to Palabek as a volunteer! We are waiting for you there and I guarantee you that your life will change," concludes the Salesian.