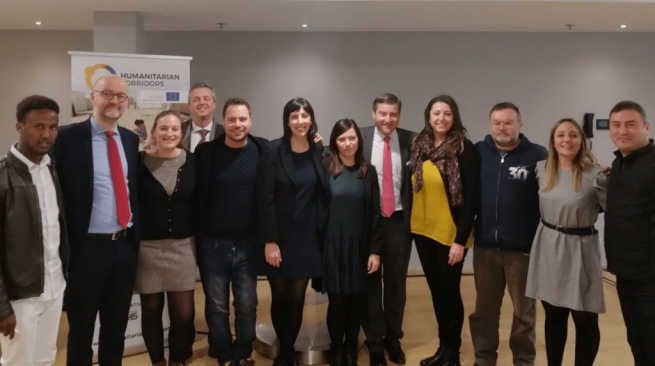 (ANS - Brussels) - "Salesians for the Social Aps", "Cnos-Fap Federation" and "VIS-International Voluntary Service for Development", three Salesian bodies, were able to present their innovative approach in terms of reception and integration during the final conference: "Private sponsored safe and legal passage" of the "Humanitarian Corridors" project which took place on December 4 in Brussels.

This model foresees a pre-departure path of formation with Italian courses, civic culture and cohabitation norms related to the future reception context, and post-arrival vocational training courses, to favor social and professional integration.

Then, to trace the paths of autonomy, the young refugees welcomed were accompanied by their educators in learning the Italian language, in entering the school system, in vocational training courses and internships, with legal and psycho-pedagogical assistance and through the construction of a personalized educational project.

The young people were also involved in activities of socialization, volunteering, and had the full support of the local community, volunteers and families.

So far this model has been applied experimentally in two centers in Sicily, the "San Gregorio" Institute in Catania, and the "Don Bosco 2000" Association, welcoming a total of 15 young refugees from Eritrea, Ethiopia and from South Sudan.

A successful case study of this model is Michele Tewelde, a 23-year-old Eritrean who has been attending the mechanics school of the Salesian Vocational Training Center in Catania since April. After escaping from his country, he met the operators of the Community of Sant'Egidio and was able to leave for Italy. On arriving in Rome, he was welcomed by a group of volunteers from the "Don Bosco 2000" association, a "VIS" branch and belonging to "Salesians for the Social APS", with which he left for Catania, to begin, alongside other refugees, his new life in Italy, at the Colonia Don Bosco

“During my stay at the Colonia Don Bosco I helped out in the kitchen, I participated in meetings with young people to present my story and in Lent I participated in a Eucharistic celebration where the priest involved so many migrant children for the time of the washing of the feet. I also met many young university students of my age who are not opposed to welcoming migrants and I felt encouraged," he says.

He loves sports and started playing in a soccer team in February. "For now this is my story and I hope I can have other nice things to tell," he concludes.

The European project "Humanitarian Corridors" has its roots in the Humanitarian Corridors created in collaboration with and by various Christian organizations, Catholic and Protestant, in the two-year period 2016-2017. They are addressed to persons potentially entitled to international protection and in vulnerable conditions (as defined by the European Directive 2013/33 of 26 June 2013).