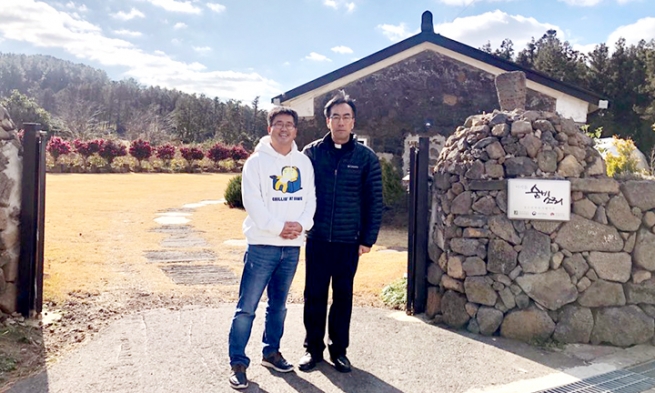 Isidore-Sumbisori is a home for young people in difficulty. It was founded by the Salesian Community, which still runs it today, in October 2018. The house was established when Fr Michael Leidon Joseph, president of the Governing Council of the Isidore Development Association (IDA), invited the Salesians to Jeju Island. Two Salesians and five boys currently live in the house of Isidore-Sumbisori, and the patron of this community is St Luigi Versiglia.

"Sumbisori" is the Korean word for the bursting sound of breath, breathing, after a long and deep immersion of the haenyeo (the seadiving women of Jeju Island). "Just as fresh air is promised to the divers after the time spent in the depths, in the same way we hope that our boys bravely go through this time of resistance and one day they will leave the depths of the water to breathe a breath of hope together with St. John Bosco," they say from the community of Jeju Island.

Thanks to good human relations and to the wise and humble pastoral approach, Fr Gabriel Oh, a Salesian of the Provincial House of Seoul, was able to gain the trust and appreciation of the local clergy, composed of 40 priests for 24 parishes and 62,000 Catholics out of a population of 650,000.

In Jeju Island there are also two Sisters of the Charity of Jesus, the FMA and two Salesian Cooperator Centers. The diocesan clergy on the island, however, still lack for numbers and there is much to be done to improve the facilities for young people at risk, and require development.

Let us pray that on Jeju Island the charism of Don Bosco shall always be shared for the benefit of young people in difficulty.