Solomon Islands - Mercy for all: Mobile Holy Door in the Diocese of Gizo 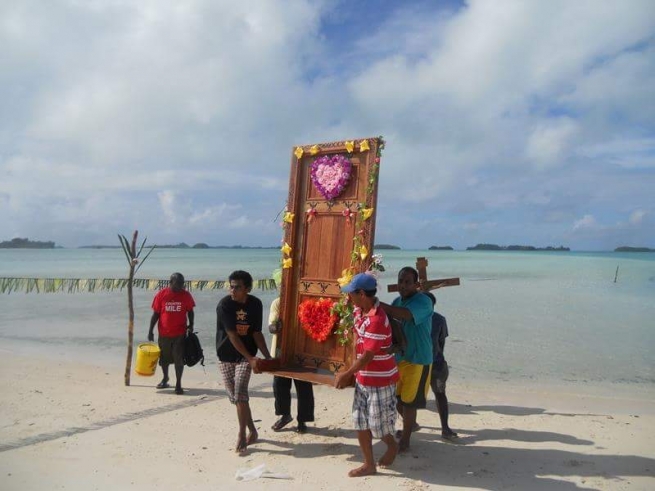 (ANS - Gizo) – When he announced the Jubilee of Mercy Pope Francis said that a Door of Mercy should be opened in every diocese, "so that everyone will be able to experience the love of God who consoles, who forgives and gives hope." The problem in the diocese of Gizo in the Solomon Islands is that the isolation and remoteness of parishes from the diocesan centre makes it virtually impossible for the people living in the villages to come to the Holy Door at the cathedral. For this reason the pastoral team of the diocese, led by Bishop Luciano Capelli, SDB, thought of a mobile Holy Door.

"The fever of Mercy that converts hearts and commits us to forgiveness, to service and solidarity, reached its highest level here in the diocese of Gizo," says Bishop Capelli who has been bishop of the diocese since 2007.

The programme was carried out in almost the same way in every village: the Warriors of the village officially welcomed the Holy Door. This was followed by a liturgy over a period of three days to present the meaning of the Jubilee. It included a prayer vigil in preparation for the sacrament of reconciliation, and then a dialogue of reconciliation between people and groups in conflict.

"The priests were surprised by the participation and goodwill experienced in a real climate of mercy” concluded Bishop Capelli. “It is beautiful when people are able to forgive and start afresh... mistakes and conflicts can become moments of encounter and growth if approached with an open heart, with faith and generosity."