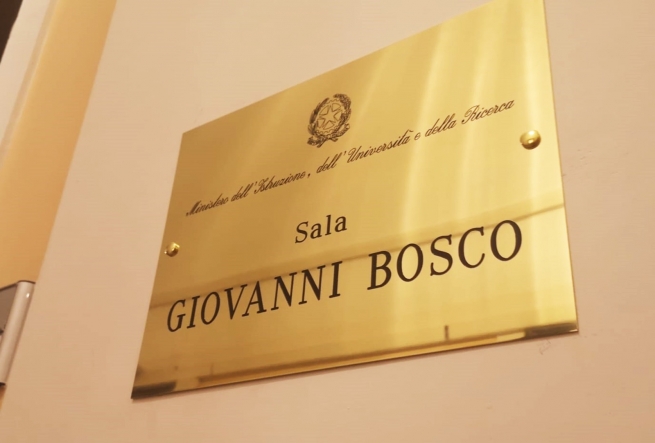 (ANS - Rome) – Giving a name to things means feeling it as one's own and sharing their value. For this reason, several halls, rooms and beautiful areas of the “Ministry of Education, Universities and Research” (MIUR), based in Rome, now have a name and surname. Several spaces, in fact, have been named after important figures of Italian history who have contributed to schools, education, pedagogy and research.

Among these historic figures, who now give their names to the halls of the Ministry, there is also Don Bosco, who is recognized for his tremendous work in the service of Italian society and, especially, of young people. His commitment, his dedication and his love for young people have helped - and still help today - entire generations to become citizens who are honest, aware, upright.

Don Bosco continues to be alive and present in society. After the murals created in the outskirts of Candelaro, with which the Saint of the Young continues to bring his gaze to the youngsters of the XXI century, he now also arrives inside the Ministry. This is a sign that Don Bosco and his pedagogy continue to live every day in the hearts and minds of many men and women.

Many, even on MUIR's social channels, have shown appreciation for the room named after Don Bosco, hoping that the Preventive System can continue to be always an excellent aid in formation and a reference point for teachers and students.

In addition to Don Bosco, MUIR has decided to pay tribute to other figures who, each in their own way, have made the world of school grand. One is the astrophysicist Margherita Hack, the educator and pedagogist Maria Montessori, the politician and jurist Aldo Moro, the Nobel prize-winning neurologist Rita Levi Montalcini, and the TV pedagogist and presenter Alberto Manzi.

With the dedication of these rooms, the Ministry of Education, Universities & Research wished to commemorate men and women who have put their talent and intelligence at the service of civil society to ensure progress and well-being for the young generations of different eras.