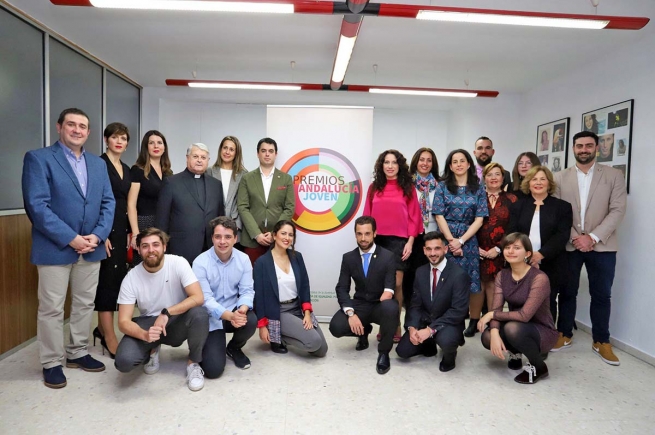 (ANS - Huelva) - The "Andalucía Joven" Prizes, awarded annually by the Andalusian Institute of Youth (IAJ, in Spanish), have awarded the "Fundación Don Bosco" with a commemorative prize for a life spent in the struggle for helping youth. Founded in Cordoba more than 21 years ago, this non-profit Salesian organization, which carries out its activity in Andalusia, the Canary Islands and Extremadura, has as its main objective the integral development of minors and young people in situations of risk or social exclusion.

The gala event, presented by the communicator Ángeles Sánchez Cueca, was also enriched by an artistic performance by the young people of the "Carabela" Youth Association of the Salesians of Huelva.

Fr Fernando Miranda, SDB, President of the "Fundación Don Bosco" and vicar of the Salesian Province of "Spain-Mary Help of Christians", thanked all the many people who make the foundation's work possible and all the public and private institutions that support it.

After 21 years of solidarity initiatives, there are currently more than 500 professionals and over 200 volunteers who make the mission of this Salesian organization possible and very much present. “Thanks above all to all the young people who make the foundation's dream come true. A dream that is already many years old: it was born in the head of Don Bosco - of which we bear the name - and he dreamed of giving a better future to many children who were lying on the street at that time ... We continue to encourage and accompany many young people so that they continue to dream and find a place in the midst of reality, in the world, in the place where they live," said Fr Miranda in receiving the award.

The "Andalucía Joven" Awards serve to give recognition to the paths taken by young people, groups, entities or institutions that stand out in their work throughout the year. These awards, which in this edition received more than 150 candidate applications from all over Andalusia, include numerous categories, such as entrepreneurship, art and culture, sport, science and innovation, social commitment, environment and sustainable development, and others.