Italy – Launch of Cause of Beatification and Canonization of Vera Grita, Salesian Cooperator 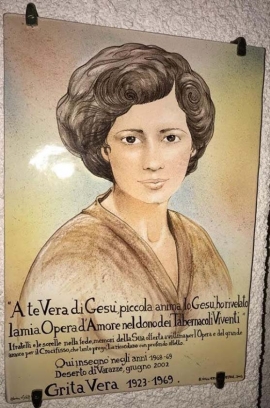 (ANS - Savona) – On Sunday 22 December, the 50th anniversary of Vera Grita's birth in heaven (1923-1969), the Supplex libellus, for the opening of the diocesan Inquiry on the life, virtues, fame of holiness and signs of Vera Grita, Laywoman, Salesian Cooperator, was officially presented by the Postulator General of the Causes of Saints of the Salesian Family, Fr Pierluigi Cameroni, to the bishop of Savona-Noli, Msgr. Calogero Marino.

This request was made at the end of the Eucharist celebrated in the church of Mary Help of Christians in Savona, presided by Msgr. Marino, and concelebrated - among others - by the bishop emeritus, Msgr. Vittorio Lupi, by Fr Francesco Cereda, Vicar of the Rector Major, who officially read the letter of the Rector Major with which the Congregation constitutes itself as Actor of the Cause; and by Fr Stefano Aspicati, Provincial of the Central Italy Circumscription, in the presence of numerous members of the groups of the Opera dei Tabernacoli Viventi.

Vera Grita, second of four sisters, lived and studied in Savona where she obtained her teaching degree. At the age of 21, during an air raid on the city (1944), she was overwhelmed and trampled by the fleeing crowd, suffering serious consequences for her physique which remained marked forever. She lived quietly, largely unnoticed in her short earthly life, teaching in the schools of the Ligurian hinterland, where she earned everyone's esteem and affection for her good and mild character.

In Savona, in the Salesian parish of Mary Help of Christians, she attended Mass and was assiduous in the sacrament of Penance. Salesian Cooperator since 1967, she fulfilled her call in the total gift of herself to the Lord, who extraordinarily gave Himself to her, in the depths of her heart, with the "Voice", with the "Word", to communicate to her the Work of Living Tabernacles. She submitted all her writings to the spiritual director, Salesian Fr Gabriello Zucconi, and kept the secret of that call in the silence of her heart.

Vera Grita responded to the gift of God by bearing witness in her life, marked by the fatigue of her illness, the encounter with the Risen One and dedicating herself with heroic generosity to the teaching and education of students, helping the needs of the families and bearing witness to a life of evangelical poverty, a Christian existence made of patience and constancy in and for the Good.

She died on December 22, 1969, at 46, in a hospital room where she had spent the last six months of her life in a crescendo of sufferings accepted and lived in union with Jesus Crucified. "Vera's soul," wrote Fr Borra, SDB, her first biographer, "with messages and letters enters the ranks of those charismatic souls called to enrich the Church with flames of love for God and Eucharistic Jesus for the expansion of the Kingdom."