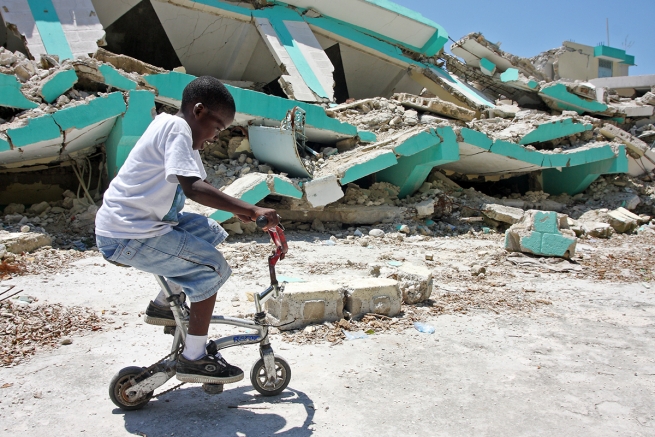 (ANS - Port-au-Prince) – On Sunday, 12 January 2020, the Salesians of the "Blessed Philip Rinaldi" Vice Province of Haiti gathered around their Provincial, Fr Jean-Paul Mésidor, to celebrate the Eucharist in the chapel of St John Bosco in Pétion-Ville, a suburb of Port-au-Prince. The celebration was an opportunity to remember the approximately 250,000 people, including three Salesians, who died in the earthquake of January 12, 2010.

During the homily, Fr Mesidor pointed out that the physical signs of the earthquake are no longer clearly visible, yet everyone remembers it as if it were yesterday. "Have we really learned the extremely hard lesson that came to us in those few seconds? [...] Certainly, through this disaster, an appeal has also been made to us. A call to be faithful to our responsibility," he said.

After the Mass, a ceremony was organized by the Rinaldi Foundation, the Planning and Development Office of the Vice Province of Haiti (HAI). It served to deliver plaques as a sign of gratitude and recognition to several organizations and individuals who have collaborated in these ten years in favor of the poorest. These institutions and people are:

The Rinaldi Foundation has, furthermore, published a catalog to present the main results achieved after 10 years, as well as the challenges and perspectives still to be pursued. The director of the Foundation, Fr Victor Auguste, said the following: "In this sense, on behalf of the Salesians of Don Bosco in Haiti, the management of the Rinaldi Foundation presents its gratitude first of all to Fr Pascual Chávez Villanueva, at the time Rector Major, who a month after the earthquake visited the country and then mobilized our entire congregation to support Don Bosco's work in Haiti. This has been done! We are very grateful to the whole Salesian world.

Our gratitude then goes to all our supporters and benefactors, to our collaborators in Italy, Spain, Germany, Belgium, France, Austria, Switzerland, the United States, Canada, to all the countries of the Interamerica Region, the Dominican Republic and Haiti.

In presenting our gratitude to you for these ten years of solidarity and collaboration, we also announce that we continue to count on your support to carry out this noble task of education and formation, which is constantly renewed."