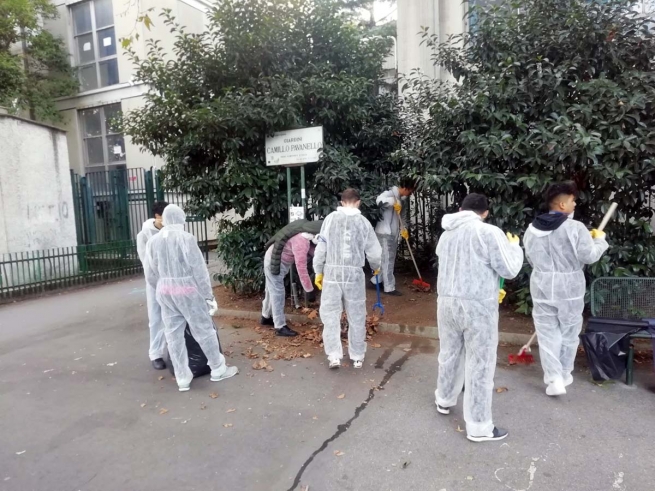 (ANS - Genoa) - The issue of ecology is gaining increasing interest in public opinion among people of all ages and nationalities. The Salesian world is also moving in this direction with the "Don Bosco Green Alliance", a global network that unites Salesian works active in defending the environment. Since October 2019, the Sampierdarena Institute has also been part of this green alliance. To become part of it, it has made three specific commitments:

- reduce waste production and improve its separation and recycling;
- raise awareness among young people who attend schools and the oratory;
- “get out” of the Salesian center with concrete and visible actions.

From words to action and deeds on October 12, when the first ecological day took place. About 50 young people participated voluntarily, namely the children of the Community for Unaccompanied Foreign Minors and several students from the Vocational Training Center.

Meeting point at 8:30 am at the oratory. At the beginning, the participants received overalls, gloves, masks and cleaning tools. The collaboration with AMIU (the company that deals with the collection and management of waste in Genoa) concerned not only the supply of these materials, but also the choice of places to clean: the gardens near the train station.

Divided into two groups and coordinated by a supervisor, the young people set to work with enthusiasm, discovering a lot of waste and being indignant at times for the poor behaviour of some people littering public places that would deserve to be better kept. Dozens of garbage bags full of rubbish were the spoils of the morning, which happily ended in the oratory with focaccia and drinks.

On November 16, an encore with an even greater number of participants - as many as 60 - and a new space in which to act: the Castagna cemetery. The most neglected areas were thoroughly cleaned up, arousing the admiration of various people who had gone to visit their dead.

The third ecological day took place on 12 December and, a few days later, the mayor, Marco Bucci, and the deputy mayor Stefano Balleari, awarded all the boys and girls of the active citizenship courses developed during 2019.

"The experience of the Ecological Days is something that we want to re-propose and that we would like to become a reference model," explained the  Salesian center's Director, Fr Maurizio Verlezza. "We care about the city, but above all we care about young people, who can grow, wherever they will go, with this sensitivity and this respect for the city in which they live."

The next ecological day has already been scheduled for next Saturday, January 18th.