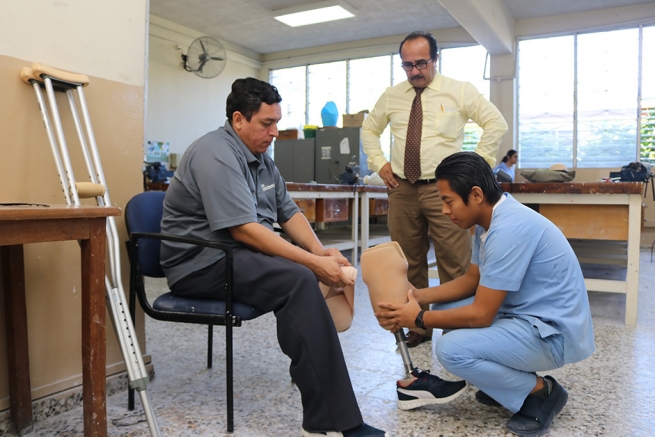 (ANS - Soyapango) - On Christmas 2019, Canal 12 and its program "Hola El Salvador", in collaboration with the "Universidad Don Bosco", through the Faculty of Sciences of Rehabilitation, fulfilled the dream of a family father, Jairo Aleman, a bus driver who lost part of his left leg due to an infection.

About 15 years ago, Jairo suffered from a disease called mycetoma, which caused him serious damage to the bones of most of his left leg, until it became necessary to amputate it in May 2018 to prevent the further spread of the infection.

During this period, Jairo and his wife Elsa Gálvez sought support to obtain a prosthesis, so that Jairo could return to work and support their young daughters; but they failed to get the help they needed.

Elsa, who learned of the "Hola El Salvador" Christmas special called "12 dreams" - which consisted of making a dream come true for 12 people - wrote to the program's editorial staff, explaining the case of Jairo and his need for a prosthesis to return to his normal life.

And their dream came true: because the production team of "Hola El Salvador" contacted the Universidad Don Bosco (UDB) to join forces in this venture and produce a prosthesis for Jairo.

Carlos Zelaya, Director of the Orthotics and Prosthetics School of the UDB, and Elías Chacón, a pupil of the same O & P School, got to work and quickly developed a trans-tibial modular prosthesis, made with duralumin modules and stainless steel.

Five days before Christmas Eve, Jairo Alemán received his prosthesis as a gift: his and his family's dream came true. His life is now different, he has been given back hope, joy and autonomy to continue his activity.

The social commitment to the reality that surrounds it means that the Don Bosco University indeed often collaborates with different bodies and organizations, including the media, to change the living conditions of the most needy families.

Furthermore, the UDB is the only teaching center in the country that has the accreditation of the International Society of Orthotics and Prosthetics.