Ecuador – Solidarity economy is possible: international support for women from Salinas and Simiatug 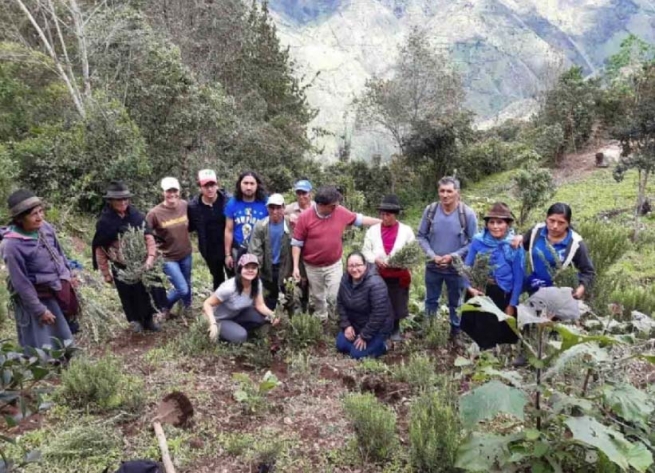 (ANS - Turin) - "Solidaridad Don Bosco", a Spanish Salesian NGO, together with the Andalusian Agency for International Development Cooperation (AACID), is supporting the project "Strengthening the production chain of aromatic plants" in the indigenous communities of Salinas de Guaranda (Ecuador), being brought forward by FFSS, the "Salesian Family of Salinas Foundation". In early January, several leaders of the Spanish NGO went to the site to accompany the project up close.

For over 20 years, the FFSS has been promoting projects for the most disadvantaged groups in the area. For example, it has promoted the creation of various production companies with criteria of solidarity economy, cooperativism and agro-ecology, and with the brand "El Salinerito" it also markets many Fair Trade products.

"When we arrived in Salinas together with our colleagues Gabriel Terán and Lina Varón from the Salesian Planning and Development Office in Ecuador, we went to see some of these solidarity economy production companies that employ more than 60 people in Salinas," says Begoña Simal, coordinator of the "Bosco Global" projects.

European visitors were thus able to learn about the reality of the wool, cheese and chocolate processing workshops, as well as for essential oils and herbal teas, which was built thanks to the support of the Spanish project and which will be completed with all the facilities in the coming months.

The following day they visited the gardens that gave rise to the project, where the aromatic plants are cultivated. Currently, this activity involves 200 women from the Salinas and Simiatug communities, who are duly trained by specialists on what measures to implement in order to increase produce.

Unfortunately, the great irregularity and poor state of local road conditions make travel difficult. This is why the women organized themselves to collectively transport what they produce to the processing plant. There, a fair price is paid for the plants harvested and cleaned to proceed to the processing chain, which ends with the creation of herbal teas, tea bags, medicinal creams, essential oils and cosmetics.

The final product is organic (with no chemicals in any phase of the processing) and with the added value of collaborating in a solidarity economy that supports direct producers and their associations.

Finally, on Friday 10 January, the inauguration of a production plant took place, with the presence of about 150 women participating in the program who reached Salinas from their communities. The event was also attended by local authorities, the Salesian community behind the FFSS and the inhabitants of Salinas.