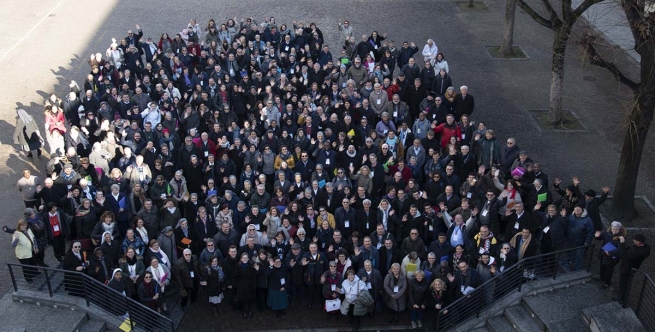 (ANS - Turin) - Continue to grow as Don Bosco's Family; implement the "politics of the Our Father" in the various realities and with their own characteristic features; give visibility to the good that is accomplished. These are the three concluding messages that Fr Ángel Fernández Artime, Rector Major of the Salesians and center of unity of the Salesian Family, launched yesterday, Sunday 19 January, from the stage of the Valdocco theater, at the end of the XXXVIII Spirituality Days of the Salesian Family.

Already in the previous days, the several hundred participants had been able to enrich themselves with many testimonies and shares, which had invited everyone to continue their apostolic mission in the name of concreteness, courage and commitment.

The participation in these Days was also significant not only for the Rector Major, but also for the almost complete presence of the General Council, together with all 10 Provincials of the Mediterranean Region.

The program of common activities provided ample time for listening to experiences and good practices of Christian, social and political commitment:

- The Bishop of Majorca (Spain), Mgr: Sebastia Taltavull Anglada, a Salesian past pupil, spoke of the passionate Youth Ministry carried out in his diocese;

- The young people of the Salesian oratory in Aleppo (Syria) talked about the activities carried out with courage and joy even during the war;

- Salesian Cooperators and Past Pupils of Don Bosco of Italy presented the "School of formation for socio-political commitment" inspired by Blessed Alberto Marvelli;

- Emma Ciccarelli, Salesian Cooperator, shared her commitment in the Family Commission of the Italian Episcopal Conference;

- Joaquin Martin Calleja, Salesian Cooperator, starting from his experience in a Vocational Training Center and with young people at risk, spoke about the spirituality of the educator;

- Jorge Santos, Past Pupil, retired judge in Portugal, testified to his commitment to forming judges in African countries;

- Nico Lotta, President of the Salesian NGO VIS, spoke of the tough battle against trafficking in human beings;

- Past pupils of the FMA of Cuneo illustrated their oratorian commitment, where many young people are becoming animators of the younger generations.

Alternating with presentations, talks and round tables were moments of shared spirituality and celebration, in the typical Salesian climate.

During the group work, divided into 23 linguistic groups, moreover, the needs identified to live together the "politics of the Our Father" were brought to light: finding the right balance between spirituality and commitment, between a good Christian and an upright citizen; give concrete answers to the current needs of young people; bear witness as credible believers; work in unity, in communities, as well as in SF groups.

Other resources are accessible on the website https://salesianfamilydays.com/ and on ANSFlickr.