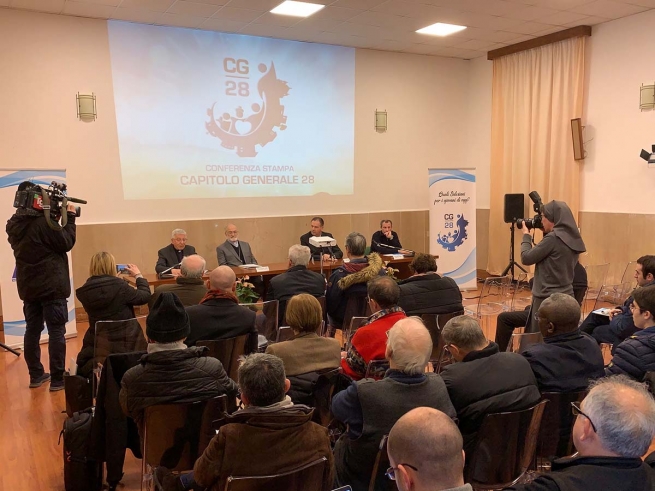 (ANS - Rome) - Living the Salesian charism with concreteness and realism to always obtain the maximum possible result in favor of all the young people of the world - Christians, Muslims, Hindus, agnostics ... - and especially the poorest and least resourceful, this is the commitment that has always distinguished the Salesians, one they aim to maintain in the future, too. The Rector Major, Fr Ángel Fernández Artime, and Cardinal Cristóbal López Romero, SDB, Archbishop of Rabat, confirmed this commitment again today in the press conference for the presentation of the 28th General Chapter of the Salesian Congregation (GC28).

The meeting with journalists and media, held at the Salesian Central Office in Rome, in the "Sacro Cuore", was opened by Fr Giuseppe Costa, SDB, journalist and former Director of the Libreria Editrice Vaticana, the Vatican publishing house. He presented the speakers; in addition to the Rector Major and Card. López, Fr Stefano Vanoli, Regulator of the GC28. He also introduced a short video with statistical data on the Salesian presence in the world.

Fr Á.F. Artime then explained the nature of the General Chapter - "a great democratic assembly, which gathers innumerable languages, cultures and experiences" - and he summarized its aims: to identify the priorities of the Congregation for the work of the next six years featuring two specific cornerstones specific to this CG28: attunement with young people in a world that changes at a dizzying pace; and the awareness of working together with the laity in this mission.

For his part, Card. López, spoke on the strength of his long and varied experience: in a secularized Europe, in the popular faith of Latin America, in contexts where Christianity is a clear minority, such as Morocco, where it is currently needed. Precisely the reality of the Salesians in that country has become the paradigm for illustrating a number of characteristics proper to Salesian work. "The Salesians have always been men of the frontiers ... We have been and we are more of the South than of the North, more of the extremes than of the centers, more of the working-class neighborhood than of the city center."

Quoting the famous motto of Don Bosco - theme of this year’s Strenna, "Good Christians and Upright Citizens" - the Cardinal observed that it applies happily even in contexts with a Muslim majority: "I am convinced that if Don Bosco was in the Muslim countries today, he would transform his famous slogan by saying: ‘Upright Citizens and Good Believers’. Don Bosco would have assimilated Vatican Council II and would have put it into practice, avoiding proselytism (which was normal at the time) and engaging in ecumenism and interreligious dialogue."

All this, of course, without denying one’s identity, but rather by enhancing and giving substance to another properly Salesian motto: "Educate by evangelizing and evangelize by educating".

Even the Rector Major, in the open question period that followed, reiterated that explicit announcement in the Congregation is and remains a fixed point, in situations where it is possible and effective; but he recalled that the best form of evangelization today passes increasingly through the witness of life that raises questions.

In response to questions from those present, Fr Á.F. Artime also explained why the CG28 will take place in Valdocco: "It is a return home, to the origins, Don Bosco is there. It is not the same thing to have a meeting there or elsewhere." Fr Vanoli offered some details on the GC28, including the novelty of the presence of some young people and lay people who will participate in the work of the chapter in two different weeks.

Before concluding, various specific services were examined, such as the presence in Venezuela or in Africa. With regard to the first, Fr Á.F. Artime spoke of the concrete support - including financial support - that is offered by the Salesians not only to Salesian works, but also directly to needy families; and recalled that, as with Ebola in West Africa and during the war in Syria, "the Salesians always remain at the side of the population in times of difficulty."

As for the African context, where the Salesians are present in 42 countries, after illustrating several examples of educational ministry, he said: "We Salesians do not solve the problems of Africa and we cannot eliminate inequalities. But surely the lives of thousands of young people would not be the same without Salesian education." And Card. López added that the Sons of Don Bosco in Africa also have the specific mission of "giving hope" to a continent where there are many young people, but they often feel trapped in a future without opportunities.

In conclusion, the Rector Major shared with journalists: “When the Church and the Congregation do something wrong, when there are errors, mistakes and fragility, it is right to say so. But in over 100 countries I have also seen how much good the Salesians and the Church do."