RMG – "We did the will of God by animating the Congregation in the style of Don Bosco": Rector Major in the last "Good Night" of his 6-year term 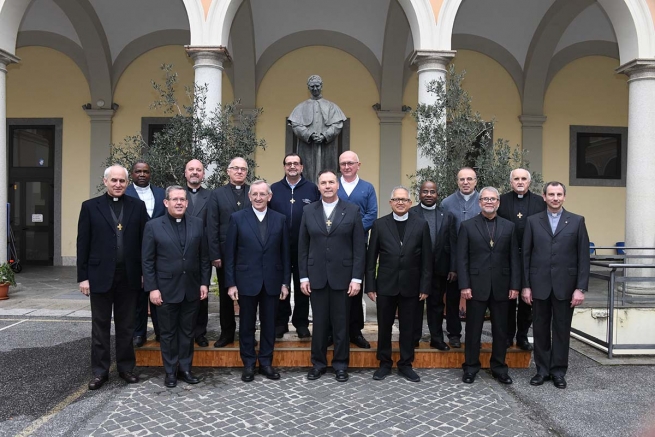 (ANS - Rome) - Yesterday, Thursday 23 January, the General Council of the Salesian Congregation met for the last time in this six-year term, and, at the conclusion of the meeting, the Rector Major, Fr Ángel Fernández Artime, presided over the last Mass of this General Council. "During this last celebration in Don Bosco's rooms," he said, "it comes directly from my heart: to thank God for these six years of work in the service of God and young people."

During the Mass, concelebrated by Fr Francesco Cereda, Vicar of the Rector Major, and by Fr Timothy Ploch, Councilor for the Interamerica Region, the X Successor of Don Bosco expressed all his emotion for the work done in these past six years: "We must be happy, joyful and extremely grateful to God for the work we have done as Departments animating the Salesian communities. We have been in the service of God."

As the Salesian Constitutions affirm, the "General Council collaborates with the Rector Major in the animation and government of the Congregation." For this reason, in this term's last Salesian "Good Night" to the "St Joseph" community of the Salesian Generalate, Fr Á.F. Artime wanted to thank all the General and Regional Councilors, as they contributed to "identifying and studying the problems that concern the common good of the Society, promoting fraternal union between the Provinces, and making sure that the Congregation is increasingly effective in carrying out the Salesian mission in the world," as is also specified in the Salesian Constitutions. The Rector Major did not fail to thank the staff of each of the departments "for their professional and service dedicated to the mission."

In the traditional "Good Night", the Rector Major then provided the details of the General Council's meetings of this winter session (December 2, 2019 - January 24, 2020).

The Provincials of 15 Provinces and Vice Provinces were appointed in:

27 Provincial Councilors and 120 Directors of works were appointed; 3 houses were canonically erected, 3 new presences opened; the reports of 9 Extraordinary Visitations and 33 Provincial Chapters were studied.

"The journey of the Congregation has been a journey of fidelity to the Lord, to Don Bosco, to the charism and to young people," concluded Fr Á.F. Artime. "We did God's will by walking and animating the Congregation in the style of Don Bosco. This experience of animation leaves me with a very serene heart and a feeling of immense and profound gratitude for the work done by each of the Councilors of the Salesian Central Office."