Spain – Official inauguration of “Salesianos Pamplona” house in Sarriguren: "We want to offer you the best education for life" 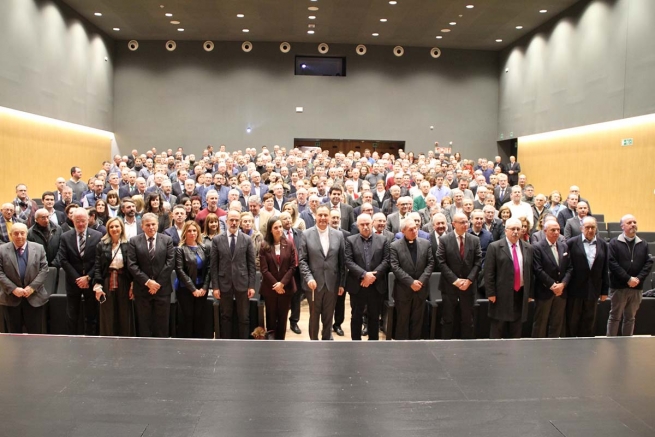 (ANS - Pamplona) - In the presence of Fr Ángel Fernández Artime, Rector Major of the Salesian Congregation and X Successor of Don Bosco, of Fr Stefano Martoglio, Councilor for the Mediterranean region, of Fr Juan Carlos Pérez Godoy, Provincial of the Salesian Province of Spain-St James Major (SSM), and Fr Angel Miranda Regojo and Jorge Lanchas Rivero respectively, the Director and the Dean of the work, the "Salesianos Pamplona" school in Sarriguren-Valle de Egües was officially inaugurated yesterday, 28 January.

The educational community (teachers, students and administrative and service staff) attended the inauguration, together with guests from different parts of Navarre. Among the guests of honor were José Mari Aierdi, second vice-president of the Government of Navarre, and Carlos Gimeno, Councilor for Education, as well as Salesians from all over Spain.

Before the opening ceremony, the students of the center, together with the teachers, had the opportunity to meet the Rector Major in the sports center. Later, they saw the documentary "92" by Raúl De la Fuente, made on the occasion of the transfer of the Salesians of Pamplona from Aralar street to Sarriguren: "History and life of the Salesians of Navarre".

"I want to greet the Salesian Family, the whole educational community of Pamplona and above all the young people who are the reason for our work," said the Rector Major. "We are celebrating 92 years of Salesian presence in Pamplona, ​​and it is a time to move to the place where we want to continue serving young people. The Salesian house in Pamplona was the first Vocational Training school in Navarre and thousands of young people who have Salesian formation in their hearts went through this work."

At 12 o'clock, local time, all the guests entered the Sports Center and joined the group of students for the ribbon-cutting ceremony and unveiling the commemorative plaque, which will then be installed at the entrance of the institute.

At the end of the opening ceremony, the visitors were accompanied by a group of students visiting the structures of the educational complex.

In the afternoon, the Church of Mary Help of Christians was blessed and the thanksgiving Eucharist presided by Msgr. Francisco Pérez, archbishop of Pamplona and Tudela.

"We want that this new Salesian presence serves the only truly important thing: to offer young people the best education for life," the Rector Major emphasized.