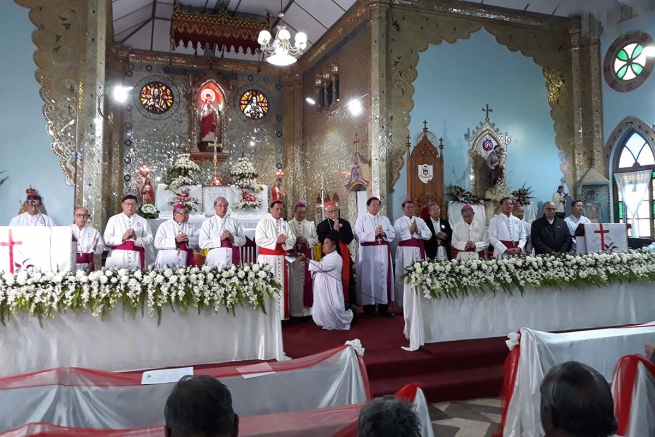 (ANS – Lashio) – Three days of celebration in the compound of the Catholic Sacred Heart of Jesus Cathedral in Lashio (28-30 January) brings together some 6,000 Catholic faithful, hundreds of priests, 15 bishops and two Salesian cardinals - Yangon Archbishop Charles Bo and Hong Kong Bishop emeritus Joseph Zen. On the evening of Tuesday, 28 January, there was a welcoming of all guests and presentation of the Lashio diocese, and on 29 January, the episcopal ordination while, lastly, on 30 January there will be the ordination of three priests from Lashio diocese.

During the welcoming ceremony in front and inside the Sacred Heart Cathedral, the Lashio Bishop Philip Lasap Za Hawng (who turns 75 years in February 2020) introduced the profile of his diocese with a pastoral heart:

“From the humble origin by the workers in mines and railways near Namtu, under the leadership first of the MEP (French) missionaries, then of the PIME (Italian) missionaries, the Lashio Apostolic Prefecture (Mons. Joycelyn Madden, SDB as first Prefect) was created in 1975. With the Salesian personnel, the direct evangelization moved to the stage of a diocese in 1990 with first bishop Charles Bo (1990-1996).

Now the Catholics are about 1.2% (26,000) of the 2.5 M population in the diocesan territory (Northern Shan state), composed of 10 ethnic groups (Shan, Kachin, Lisu and Wa), while most of the Catholics are living in poor conditions. The other Christian population is about 10% (!) with many denominations. Due to the strategic position on the Oriental Highway that connects Mandalay and China boarder (Road and Belt project - main trade route), with the gas and oil pipelines and possible speed train project to China, the diocesan territory is in the middle of development.”

To conclude, Bishop Philip also asked the Catholic faithful to pray for peace, end of the numerous armed conflicts, freedom from arms and drug trafficking: "We pray for the lasting peace in the diocese!"

While the first Apostolic Nuncio to Myanmar (and Thailand, Cambodia, Laos) Archbishop Paul Tschang In-Nam highlighted the appointment of the bishop-elect on the Feast of Saint Luke (18 October) and hopes the new bishop will proclaim God's love and mercy in today's society to become like Luke the Evangelist, a minister who heals the wounds of his people. Moreover, he shared that “Pope Francis prays daily for Myanmar, for the respect of human rights and for peace and reconciliation in this country.” And he requested the faithful to pray for his universal ministry!

Among those present was a strikingly high number of young people coming from the 19 parishes of the diocese, who attended the evening entertainment - concert on the stage near the cathedral.

The Salesian Family of Myanmar is present with many young people from Salesian settings, FMA Sisters, SDB Brothers and Fathers and Aspirants from Thibaw who spent almost one week preparing for the feast in Lashio. Among the distinguished guests were also two Salesians from India (Guwahati and Kolkata province), two Salesians from Hong Kong (Card. Joseph Zen, and one deacon), two Salesians from Vietnam, one missionary from Cambodia, two Salesians from the General House (Rome), the Bishop of Saitama (Tokyo-Japan) Mario Yamanouchi, Archbishop emeritus of Guwahati Thomas Menamparampil, Fr Václav Klement, SDB, the East Asia-Oceania Regional Councillor, and one Salesian Cooperator from Cebu.