Italy – Feast of Don Bosco in Valdocco begins: "Without Don Bosco we would not be here today as a Salesian Family" 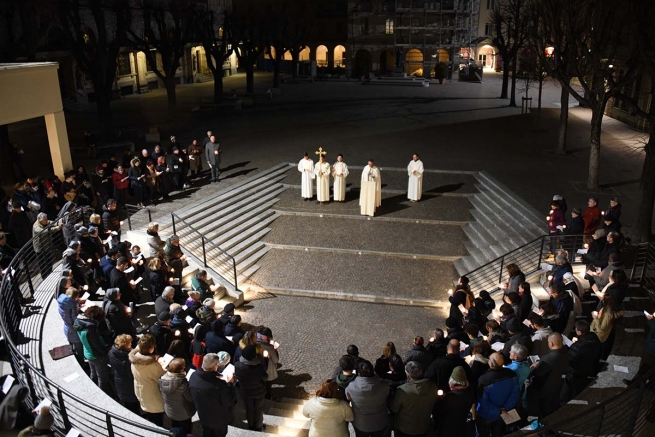 The first moment of prayer was at the foot of the statue of Don Bosco, in the main courtyard of Valdocco, where the life of Don Bosco was remembered together with the young people. "Don Bosco has made this place a space for dialogue and meeting with young people". And so the participants in the vigil prayed for all the young people in the world.

The second moment of prayer took place in the Chapel of San Francesco di Sales, the place where Don Bosco invited young people to live the profound encounter with God in the Eucharist. This place commemorated the multiplication of the hosts by Don Bosco himself and Domenico Savio's prayer to God. This chapel was a fundamental place in the educational process promoted by Don Bosco, it was the place where he invited his boys to live in the presence of God.

The third moment of prayer took place in the Basilica, where the testimony of Don Bosco and his relationship with Mary Help of Christians was offered. "Without her, without the Help of Christians, his life would not make sense," said the celebrant.

At the end of the celebration, the participants were invited to participate in an original prayer, when the artist Andrea de Simone represented Don Bosco's story in an exciting and surprising way through drawings on the sand. "When I was invited to make this artistic proposal," he explained, "I couldn't resist. Don Bosco is a saint with great vitality, who gives us the example of total trust in children ... The drawing on the sand was thought of on the life of the Saint, who invites us to live in hope and joy."

Finally, the Rector Major, Fr Ángel Fernández Artime, offered the traditional Salesian Good Night. “To say Don Bosco is to say Mary Help of Christians. The Saint of the youth had the profound conviction that it was she who did everything. But we cannot think of Don Bosco without the presence of his mother, Mamma Margherita. Don Bosco was not born rich. Don Bosco was born into a family, with the fragility of a child and his life was marked by sacrifices and by the presence of God and Mother Margherita. Today is the time to be thankful for his life. Without Don Bosco we would not be here today as a Salesian Family."