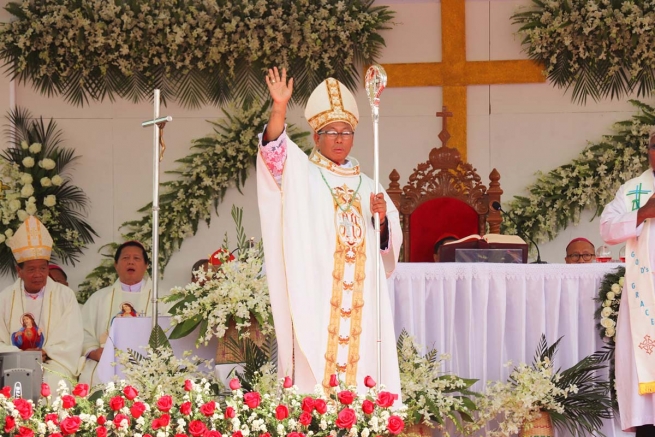 (ANS – Lashio) – Since the establishment of the Lashio diocese in 1990, its second episcopal ordination was celebrated on a sunny January 29 at the Sacred Heart Cathedral compound in the open air.  The presence of the almost complete Myanmar Bishops Conference (together, over 20 bishops) with hundreds of priests and thousands of Catholic faithful dressed in dozens of different ethnic groups blending, mad the ordination a truly wonderful celebration.

"God's grace is sufficient" (2 Cor 12,9) is the motto of the 132nd Salesian Bishop, who comes from the Kachin ethnic group village of Pangpau - Hpahping parish (one of the 19 in Lashio diocese) as the fifth of six children, and of the joyful presence of the Kachin people being felt through these days. Just as Salesian Lucas Dau Ze was ordained to priesthood 24 years ago, today the Salesian priest Lucas Dau Ze was ordained by the first Bishop of Lashio, Charles Bo, SDB.

In the presence of ecclesiastical, civil and military authorities, Bishop of Lashio Philip Lasap Za Hawng shared his diocese's main challenges, especially as regards the young: 'Young people are driven out of their home villages and towns due to enrollment (conscription) to many armed groups, fall as victims of human trafficking; others are becoming drug addicts or simply idle and unemployed or are taken by other Christian sects." He pointed also to the root cause of these issues - a strong need for justice for the ethnic minorities in the country that can't enjoy their own territory's resources.

After the ordination, the newly-ordained coadjutor bishop addressed the entire assembly of Lashio diocesan faithful, gave thanks to all who contributed to this wonderful celebration and to the presence of many international guests. Indeed the presence of bishops, priests, Salesians, benefactors, classmates and well-wishers from China, Japan, Korea, India, Singapore, Philippines, Vietnam, Cambodia, Italy, Germany and other countries gave this celebration a truly Catholic and universal flavour!

In the afternoon, there was a traditional Kachin dance 'Manaw', followed by the Rosary and Adoration in the Cathedral, led by the young people.

Then dinner was served around the large compound in different rooms. A busy festive day concluded with dances and music concert prepared by many different Catholic groups from more than ten ethnic groups, attended mostly by young people until late.

For the episcopal ordination, many offered their gifts: the Rector Major of the Salesians, Fr Angel F. Artime also sent his gift of a Don Bosco statue with best wishes: 'My dear confrere Lucas, with my affection I wish you a happy new mission with the heart of Don Bosco! Praying for you!"

As Bishop Lucas was a provincial delegate for the missionary animation, Fr Guillermo Basanes, Councilor for the Missions, also sent a special greeting: 'Dear Lucas, we are proud of your call, of your generosity and of your new mission!' From the Basilica of the Sacred Heart of Jesus built by our beloved Father Don Bosco we keep you in our hearts and prayers. And please... bless us!'

For the celebration to run smoothly, many Myanmar Salesians worked very hard, starting from the provincial Fr Charles Saw, who took special care of the VIP guest from abroad, Salesians took charge as MC of the Ordination Mass, as the Choirmaster did for the celebrations, and Thibaw Salesian Aspirants who spent one full week to prepare the logistics and were, indeed, very visible with another 120 official 'Volunteers' in the Cathedral campus.