Italy – Rector Major: "May Don Bosco help us to not disappoint the aspirations of our young people" 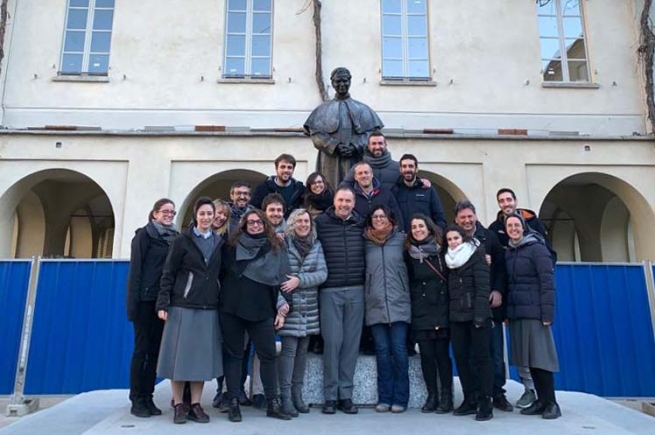 (ANS - Turin) - Valdocco is celebrating. Today, January 31, 132 years since Don Bosco's departure for Heaven are being celebrated. Yet, even after all this time, his presence is constant, alive, almost real. These days, hundreds of people have passed through the Salesian places: they kneel at the feet of the Help of Christians and then go to visit the imposing relic of the Saint of Youth. Virtually everyone passing puts their hand on the glass, as if they wanted to say something to Don Bosco. The Rector Major, Fr Ángel Fernández Artime, has been in Valdocco, and yesterday, recalling the visit of Pope Francis in 2015, he invited the whole Salesian Family "to not disappoint the aspirations of our young people."

Already yesterday, hundreds of boys and girls passed before Don Bosco's tomb. A teacher, leading a group of children, told them when she found herself in front of the relic: "Don Bosco was a saint who dedicated his life to kids who had neither home nor family. He welcomed them all, educated them and then trained them as professionals for life. He helped them change their lives." Then she added: "If Don Bosco had not existed, these children probably would not have had a home, let alone a family. This saint you see now has done a lot, but truly a lot for the poor kids."

Last night, January 30, the eve of the feast of Don Bosco, Fr Á.F. Artime animated a moment of prayer in the Basilica of Mary Help of Christians and recalled the words that Pope Francis said when he visited that Basilica in 2015.

"The Pope left us three tasks that we must commit ourselves to carrying out. In the first place, he said that the souls of boys and girls are open to life and to the encounter with God, and we as the Salesian Family must accompany them in this essential phase." Then, he invited the whole Salesian Family to collaborate with the fundamental objective of "saving souls, working with young people and serving the poorest." And he concluded by asking everyone “to not disappoint the profound aspirations that young people have. What aspirations? The need for life, openness, joy, freedom, future and to collaborate in building a more just and fraternal world."

At the end of the celebration, the Rector Major approached Don Bosco's altar and, from the same place where the Saint's body is located, he imparted the blessing of God to the whole Salesian Family in the world.