Italy – "Young in search of life's meaning, of hope for the future": Feast of Don Bosco in Valdocco 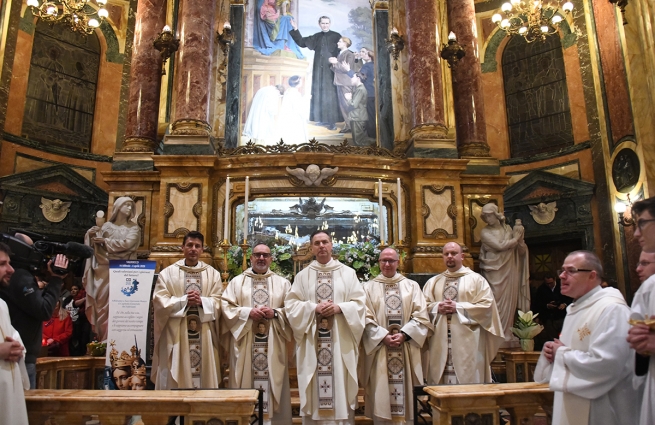 (ANS - Turin) - The feast of Don Bosco has ended in Valdocco, Turin, the city of Don Bosco. As the Rector Major wrote in the book "The city of Don Bosco", "the true city of the Saint were the young"; in fact, the Saint of Youth identified himself with the city where thousands of boys lived on the street, in the avenues, in the outskirts, and dedicated himself to them to give them three things: “a house where to feel like family, a father who listened to their problems, and a promising future.”

Presiding at the 11:00 Eucharist was Msgr. Heriberto Bodeant, bishop of Melo, Paraguay. “In this Mother House, on this holy day dedicated to Don Bosco, we cannot neglect the fact that we feel like the essential nucleus of a large family that wants to embrace the young people of the world,” said Fr Guido Errico, Rector of the Basilica, during the homily.

The courtyards of Valdocco were full of young people as they were in Don Bosco's time and when Fr Ángel Fernández Artime, Rector Major, greeted the pilgrims, it seemed that it was Don Bosco himself who had come to meet the young people coming from many parts of the world. The 10th Successor of Don Bosco presided over the Eucharist in the afternoon, at 6:30, with the young people of the Salesian Youth Movement. He affectionately addressed them: “Dear boys and girls of all the places of our beautiful Salesian world, and all of you present in this beautiful Basilica of Mary Help of Christians, I have prayed for you. I think, my dear young people, that praying for you is a beautiful expression of affection. Know that the most precious thing in our life is Jesus Christ, who has conquered us and who is in love with us ... It is the unique and greatest thing that Don Bosco has offered to his children.”

The last Eucharist of the day was presided by the archbishop of Turin, Msgr. Cesare Nosiglia, who in his homily recalled the work of Don Bosco for the young people of his time. “Young people, as Don Bosco teaches, are always present, even if they seem absent: they do it with unusual languages, but very clear to those who can interpret them. Only by accepting and understanding these languages ​​can we enter their inner world and establish a contact not only external, but deeply and amicably ... After all, they continue to be young in search of the meaning of life, of sincere affection, of joy and hope in the future.”