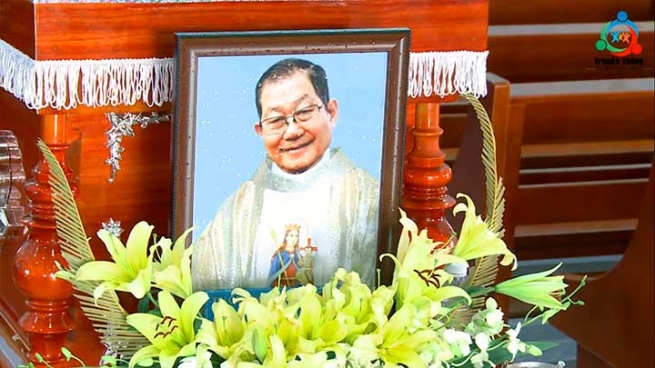 (ANS – Ho Chi Minh City) – With loving memory and gratitude, the Province of Vietnam-Mongolia sorrowfully announces the Heavenly Home Return of one of its members, the beloved Fr John Nguyen Van Ty, SDB. After a short period of a critical sickness, surrounded by his confreres, he passed away on 29 January, 2020, at the age of 76, after 59 years of religious life and 49 years of priestly life.

Fr John Nguyen Van Ty was an orphan at his childhood, raised by the Daughters of Charity and embraced by the Salesians as a teenager. He belonged to the first group of Vietnamese novices (1959) under the guidance of Fr Andrew Majcen, the founder of Salesian works in Vietnam.

After his initial formation in Hong Kong (China) and Rome (Italy), he returned to Vietnam and assumed different responsibilities, such as Principal and Rector of the Technical School. At the end of the Vietnam War, he took up the role of Superior of the Delegation as all missionaries were expelled by the new regime.

Together with his Delegation council, he animated and led the remaining Salesians to enter the new way of life and apostolate in a Marxist–socialist society, living and working with the poor people in villages and farms and, at the same time, figuring out how to serve the young in an atheist society, in particular, focusing upon vocation ministries in spite of inner and outer difficulties.

As the situation was being politically improved and more young people joined the Salesian Society, the Salesian Delegation was raised into a Vice-Province in 1984 with his continuing leadership. During a six-year break from leadership, he was appointed as the Novice Master (1991-1997) and appointed again as a Provincial in 1997.

Finishing his office as provincial, he was sent by the Rector Major for a renewal course to Berkeley, then to the Mongolia mission. It was there that he almost collapsed with severe heart attacks. Recovering and returning to Vietnam, he dedicated his life to giving conferences to the novices and conducting retreats to various members of consecrated congregations, as well as lectures in various seminaries until his recent final illness.

The Vietnamese Salesians are deeply grateful to Fr John Nguyen Van Ty as he guided the Delegation (then the Vice-Province and finally a Province) through various unseen difficulties caused by our historical situation. In spite of human limitations and possible human errors during his leadership, one may say that the Salesians in Vietnam have been led by him to live faithfully to Don Bosco’s mission to the poor youth and to the missionary spirit!

The whole Salesian Family of Vietnam, especially the Don Bosco Past Pupils would and shall remember Fr John very much!

The Sower went out to sow the seeds. The seeds that had been sown by Fr John Nguyen Van Ty have grown and born fruits with more than 400 Salesians SDB, among them, more than one hundred have been called to be ad gentes missionaries in all five continents.

The Funeral Mass was held at “Don Bosco” Xuan Hiep church, Thu Duc, Ho Chi Minh City, at 8 o’clock on 1 February, 2020, presided by the Archbishop of Ho Chi Minh City Archdiocese, Mgr. Joseph Nguyen Nang, with three other bishops and more than 180 priests from other dioceses and congregations who concelebrated with him. During the Mass, Mgr. Nguyen Nang reminded people about joy in the Catholic faith when a good Christian, a holy priest has passed away to return to God and mentioned the dedicated services of Fr John, not only in the Salesian Congregation but also for the needs of the Church in Vietnam and evangelization in the world.