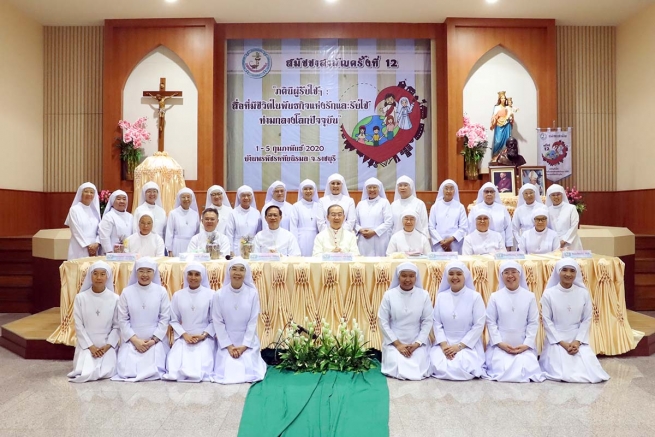 (ANS – Ratchaburi) – From 1-5 February 2020, the Sisters Servants of the Immaculate Heart of Mary (SIHM) held their XII General Chapter at Bann Pornpatchara Hatainiramol, Ratchaburi Province, with the theme: “SIHM: the living message of the Mission of Love and Service in the midst of the present world.”

Bishop Joseph Prathan Sridarunsil, SDB, the Bishop responsible for the SIHM Congregation, graced the occasion by presiding the celebration of the Holy Eucharist at the opening of the Chapter. Noted was also the presence of Fr Surachart Kaewseni, the representative of Bishop John Bosco Panya Kritcharoen, the local Ordinary, Fr John Bosco Dheparat Pitisant, the Provincial of the Salesian Province of Thailand, and Sr. Theresa Kohasuwan, the representative of the Provincial of the FMAs.

The Sisters Servants of the Immaculate Heart of Mary was born through the initiative of Bishop Gaetano Pasotti, SDB, the head of the first Salesian missionaries to enter Thailand. The Bishop announced the official establishment of the Congregation on 7 December 1937 in Bangnokkhuek, Samut Songkhram Province. There were 7 young women working at the kitchen of the Salesian seminary in Bangnokkhuek; they started their novitiate on 8 December 1937 to lay a strong foundation to their religious life.

Bishop Gaetano Pasotti invited two FMA Sisters - Sr. Antonietta Morallato, Novice Mistress, and Mother Luigina Di Giorgio, the first Directress, to help in the initial formation of the candidates. They stayed on in this responsibility from 1941 to 1964. After a period of intensive formation, the first group of 6 novices made their first religious profession. From this small, humble beginning, the Congregation started to send the Sisters to work at the various churches of Ratchaburi Diocese.

In 1964, Mother Agatha Ladda Satvinit was elected by the members to be the first Thai General Superior.

In 1987, the SIHM Congregation became officially a member of the Salesian Family. To distinguish the charism and apostolate of the SIHM are the educational commitment, also carried out through different institutes, and a zealous missionary service.