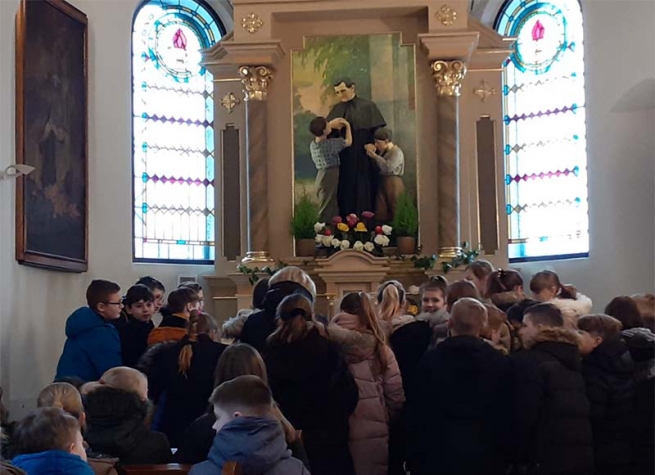 (ANS - Telšiai) - Telšiai is a Lithuanian town of about 30,000 inhabitants, located in the Samogitia region, a north-western region of Lithuania and the last land of Europe to be evangelized. Here, for some time now, the spiritual sons of Don Bosco have been active with a small presence, still not canonically erected, and who, faithful to the charism of their founder, never miss an opportunity to spread the Gospel message in the Salesian style. And what better occasion than the Feast Day of Don Bosco to boost their activities?

In fact, even in Telšiai, Don Bosco was celebrated in a big way, arousing the interest of young people and the enthusiasm of educators and faithful. The affection for the Saint of Youth has well taken root: the urn containing a relic of Don Bosco arrived in the town and in the school where the Salesians now work well before they arrived. It was March 2014 and a festive procession of over 600 young people, preceded by the band, paraded from the school to the cathedral, where they entered the notes of the song "Giù dai Colli, or Down from the Hills".

And in January 2020, the name of Don Bosco resounded in Telsiai, too, and in particular in the "Borisevicius" school and in the parish "Assumption of Mary", the only one in the whole diocese to have an altar dedicated to the Father and Master of Youth.

Among the most engaging and incisive initiatives was the testimony of an oratorian from Volpiano, now an established chef and well-known face of Lithuanian television, who transmitted the passion and importance of the Salesian oratory in his life to the young high school students. The culmination of the celebrations was reached with the solemn conclusion of the novena dedicated to Don Bosco, which offered ample opportunity to make the faithful passionate about the charism of the Saint of young people.

"We believe that Don Bosco himself has prepared the entry of his children into this town. For this reason, we hope that here a spring will soon begin for our mission among the young," affirms enthusiastically Fr Onorino Pistellato, SDB.

The Salesians in Telšiai are mostly active in a state-run Catholic school, which includes the entire school cycle, from elementary to high school, with a total of 630 students and 56 teachers. In the institute, the work of animation is broad, promising; to this, there is the pastoral ministry in the parish and throughout the territory and, as a prospect, in the oratory.

The presence in Telšiai is also a mirror of the international aspect of the Salesian Congregation - and of its mission. With the arrival, from the house in Vilnius, on which Telsiai depends, of two young missionaries, to whom a third will soon be added, four continents will be represented: Europe, Asia, America and Africa.