Venezuela – Rector Major, "He has come to confirm his brothers in faith: a gesture worthy of a Father" 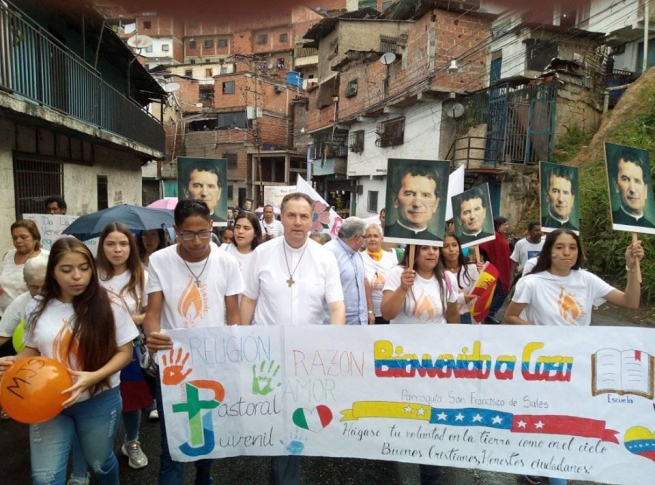 (ANS - Caracas) - Two events marked the visit of the Rector Major, Fr Ángel Fernández Artime, to the "city of spring", Caracas, on Saturday 8 February 2020: the installation of the new Provincial and the meeting with the Salesian family. In each appointment, the Rector Major left a message of hope, a word of encouragement, a charge to continue the struggle in the midst of so many difficulties in a wounded city, which is struggling to survive the devastation caused by an economic model.

In the "Don Bosco" National Temple of Caracas, the 10th Successor of Don Bosco presided over the Eucharist of the installation of the new Provincial, Fr Rafael Bernardo Montenegro Latouche. In the presence of Fr Francisco Méndez, former Provincial of Venezuela, of Msgr. José Ángel Divassón, Apostolic Vicar Emeritus of Puerto Ayacucho, and of numerous Don Bosco Salesians of various works, the Rector Major thanked Fr Méndez in his homily and encouraged Fr Montenegro. "Dear Father Rafael, your ministry as Provincial means service. The confreres ask you to be a father and brother close to them."

Fr Á.F. Artime then had the opportunity to dialogue with Msgr. Tulio Luis Ramírez Padilla, Auxiliary Bishop of Caracas, who came to represent Cardinal Baltazar Enrique Porras Cardozo, apostolic administrator of Caracas. In their dialogue, Msgr. Ramírez had words of great praise towards the spiritual Sons of Don Bosco and towards the Rector Major himself: "The Salesians are making a very precious contribution among us. You have come to confirm your brothers in faith: it is a gesture worthy of a father. Your children give a clear image of Christ, the Good Shepherd; in an outgoing Church, the Salesians always show themselves as missionary educators. All their works can be recognized as 'field hospitals'. They carry out an extraordinary apostolic work, blessed by new vocations."

Sunday 9 February was another day of celebration and meetings with hundreds of people. The Rector Major moved to the sector of Petare, in La Dolorita, where he presided over the Eucharist, during which he said: "There are two great forces in the world: love and prayer. Love heals, moves, inspires, strengthens; and prayer, even if not seen, transforms, guides and protects."