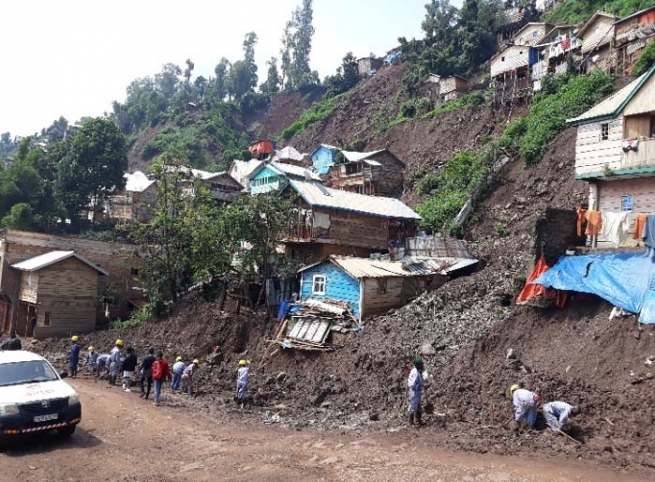 (ANS - Bukavu) - “Dear friends, once again I take the liberty of informing you about the silent disasters affecting our small world of Bukavu. After (and on top of) the fires, landslides have now come upon us.” Thus begins the heartfelt letter that Fr Piero Gavioli, a Salesian missionary in Africa for over 35 years, sent to ANS, a letter sent together with several other friends and supporters of the Salesian work, to ask for help in favor of the poorest and most needy population of Bukavu.

Between 2018 and 2019, I launched several appeals to ask for help for the fire victims in Bukavu. Unfortunately, the fires, albeit on a smaller scale, continue. Our pastor told us that in 2019 a thousand families in our parish lost their home due to fires. At the end of January, the Diocesan Office for Medical Works was also set on fire, for unknown reasons. It was not only an office, but also a factory and a warehouse for medicines. The archives, the laboratory equipment, the medicines just produced and ready to be put on the market, the IT equipment, everything was reduced to ashes ... The damage has been immense.

During the same period, we had heavy rains in Bukavu that caused landslides, mudslides, small floods, the collapse of the walls of the houses ... At least ten people died.

The causes are always the same: due to misery, many families arrived from the countryside to the city, driven out by wars and guerrillas, from the lack of security, from poverty ... In Bukavu, they built their shacks wherever they found a small open space, on steep treeless slopes, exposed to foreseeable landslides. The public administration has been selling land not suitable for construction for years ... In official speeches, the government promises to decongest the city, to prepare new building land in outlying areas. So far, nothing has been done. And the disasters continue.

In recent landslides, many families, even those we know, have lost everything. And they come to the Don Bosco Center to ask for emergency aid: clothes, food, money for the children's school ... And we tell them: as long as we are helped, we will help you ...

The problem of landslides in densely populated irregular settlements is, unfortunately, not a rare occurrence when and where large unauthorized agglomerations, if not true and proper shantytowns, arise on risky land. Between March and August 2017, for example, it was the Salesian works in Addis Ababa, Ethiopia, and the "Don Bosco Fambul" in Freetown, Sierra Leone, which had to take care of hundreds of IDPs following the landslides they had assailed the slums close to them and which had caused hundreds of deaths.