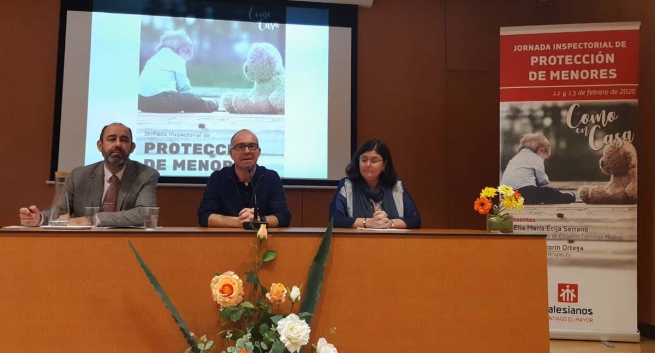 (ANS - Madrid) - The Salesians educate in schools and want their educational centers to remain safe environments for the children and adolescents who go there. As a continuation of the work being carried out in this sector during these years, the Salesian Province of "Spain-St James Major" held a conference on the protection of minors and vulnerable adults on 12 and 13 February, attended by 51 staff members of the Salesian educational centers.

Two expert speakers on the subject shared the necessary tools to prevent, identify and address possible situations of ill treatment or abuse against minors, both inside and outside the school environment. Elia María Écija, legal adviser of the Catholic Schools of Madrid, focused on the protocol to be followed in such cases. For her part, the doctor and psychotherapist Lourdes Azorín invited the participants to take a careful look into the educational environments, so that they are spaces where everyone can feel well treated and live in mutual care.

In addition, some of the participants had the opportunity to share their experiences in identifying and intervening on various cases of abuse in the intra-family environment and in other areas of life of minors.

The day included the testimony of a victim of sexual abuse, who brought participants closer to the reality of those who suffered abuse. In his presentation, he traced a profile of the abuser and warned about the risk factors of abuse. Knowing this reality is fundamental to generate a culture of protection of minors in educational centers.

The Salesian educational centers in Spain have equipped themselves with a code of conduct to prevent these situations, a code which is already in force and which is kept in mind by all those who work in the various environments of Salesian works. In fact, the educators of the centers studied it to put it into practice.

The two Salesian Provinces in Spain have a commission for the protection of minors and vulnerable adults. They drafted both the code of conduct and the protocols of action for these cases, according to the indications of both the Church and the Salesian Congregation.

It should be noted that some initiatives are being undertaken in recent years to address this problem. In particular, the Vicars of the Provinces, who are responsible for the Commissions, continue to be trained and updated. The same is true for religious, lay people and professionals in the centers, who through training days like the one held last week complete their skills to accompany possible situations of this type.