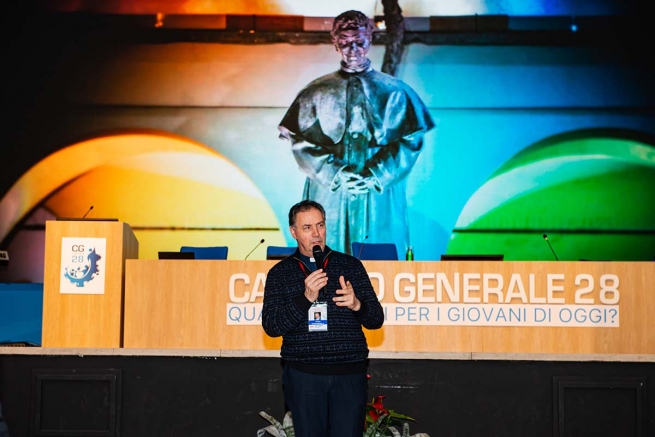 (ANS - Turin) - Monday 17 and Tuesday 18 February are the first days totally dedicated to chapter work. The days have begun to be lived with their ordinary pace. At 6:45 am, all the capitulars, divided into linguistic groups, begin the day with prayer: praise, meditation and the Eucharist, as if it were an ordinary day in community life, in the daily rhythm of the many geographical and cultural contexts.

Daily work takes place in four assembly moments, days mainly engaged in listening, studying, in a first personal reflection for taking stock of the presence of the Congregation in the world.

­Days of listening, above all: in the next few days, the reports will be taken up again, studied and discussed in Commissions, and also to elaborate evaluations and any questions of integration to be addressed to the Rector Major.

The unifying theme of the two days is the Report of the Rector Major for the Society of St. Francis of Sales with reference to the six-year term, namely 2014-2020.

Article. 119 of the General Regulations asks in fact that "in one of the initial sessions the Rector Major, or whoever takes his place, will present a general report on the state of the Congregation". This is a task that the Rector Major is carrying out, also through the collaboration of his Councilors.

In succession, the Sector Councilors, the Regional Councilors and the Secretary of the Secretariat of the Salesian Family presented their papers. Each speaker presented a summary of what is available to all the Chapter members, both in hard copy and on the web pages inside the Chapter. There was no shortage of presentations, with the help of videos and slides.

Of note, also the reference, by some Directors, to documents, materials, and sites that complement the reports presented.

A first element that unites all the relationships emerges: with a reference to the six-year term that is now ending, each Report has originated from the previous term and, after an examination and an evaluation of the path traveled, identifies several challenges to be examined to be actively present in the next six years.

Listening continues until tonight, Tuesday 18 February, with the specific intervention of the Rector Major who can be followed on the ANS Facebook page starting at 5:30 pm (UTC + 1).

On the occasion of the first Chapter Assembly, a communquè was also published as regards the broadcasting of the General Chapter's work sessions, which makes use of the different communication channels: information on www.infoans.org, official documents on www.sdb.org, ANS presence in social networks (Facebook, Twitter, Instagram, Flickr and ANSChannel on YouTube) and the live broadcast of various moments, on the ANS Facebook page.